Home » Where » Malawi » Our work in Malawi

Our work in Malawi 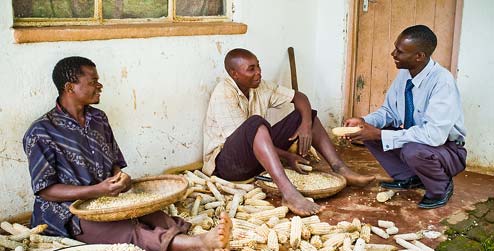 We need to increase the support we give to people with HIV and people at risk of infection.

We need to promote a greater and more meaningful involvement of civil society organisations in Malawi’s democratic processes and in achieving changes in policy and practice.

Read about our current projects in Malawi

Why we work in Malawi

Progressio opened its country programme in Malawi in 2007, shifting resources from our programme in Namibia which was being wound down.

Because of our expertise in responding to HIV.

Nearly a million of Malawi’s total population of 13 million are living with HIV – including nearly 100,000 children. 12 per cent of 15 to 49 year olds are estimated to be living with HIV, one of the highest prevalence rates in the world.

And because of our expertise in helping people build livelihoods in a hostile environment.

Water scarcity and drought is a major and growing problem in Malawi. Most agricultural production is rain-fed, leaving small- and medium-scale farmers particularly vulnerable to drought. Less than two million hectares of the original four million hectares of forest cover remains. Ongoing deforestation and farming on steep slopes have led to significant soil erosion and the loss of millions of tonnes of valuable and productive topsoil.

And because of our expertise in enabling more people from poor and marginalised communities to participate in decision-making processes.

Malawi has a nascent democracy that needs nurturing. We will draw on our wide experience of working with civil society organisations in other countries to help organisations in Malawi – including those representing people and communities most affected by poverty and exclusion – achieve changes that will improve the lives of the most vulnerable and marginalised groups of people in Malawi.