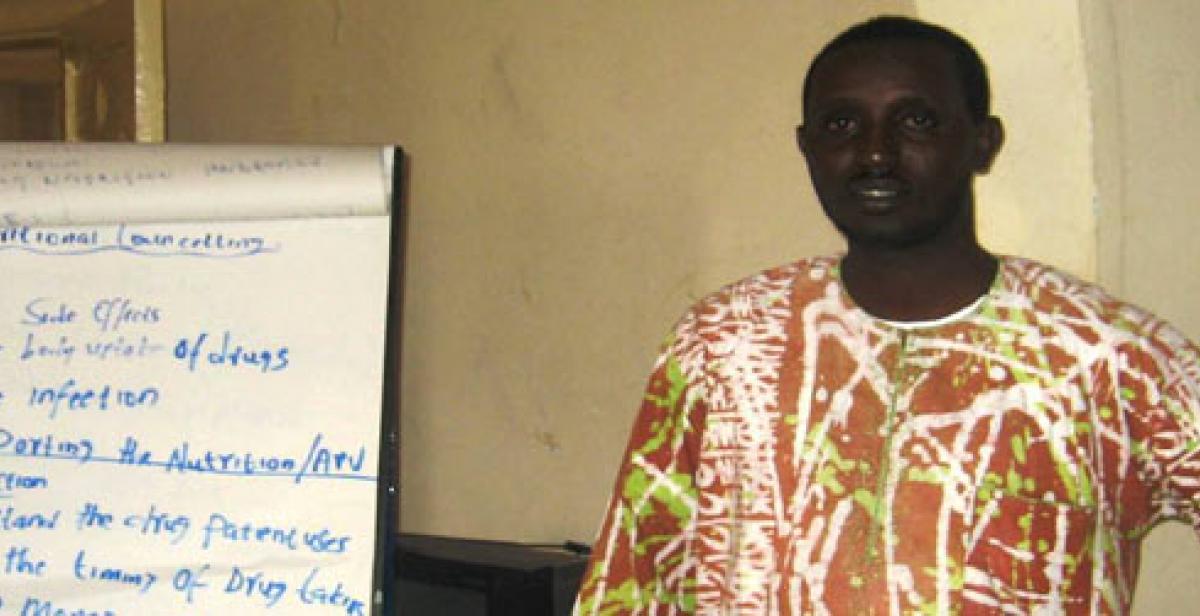 Ali is a HIV and AIDS Development Adviser from Kenya currently working with Talowadag Coalition Network against HIV and AIDS in Somaliland.

After college, I started as a volunteer with Sisters of Mercy Kenya  as an HIV and AIDS Counsellor briefly, then I joined Goal Kenya international as a volunteer in peer education and home based care in a programme called “HIV and AIDS street Education programme”. Our main objectives were to train youths, especially the out of school youth, on HIV and AIDS issues. We also trained them in community theatre approaches, including drama skills and puppetry shows, in order to mobilise the community to seek health information from public health centres and also address the issues of HIV and AIDS in their local communities. I volunteered there for more than two years before an opportunity presented itself to volunteer again with Voluntary Service Overseas (VSO) in Nigeria where I worked as a Behaviour Change Communication Adviser in Benue State Secretariat on HIV and AIDS in a programme funded by DFID (the UK Department for International Development) called “Strengthening Nigeria’s response to HIV and AIDS”. My main role was to help set up the coordination platform that is in line with the prevention strategies for Benue state of Nigeria. I also coached and mentored the local prevention officer on HIV and AIDS.

First it was the striking similarities with the VSO model in terms of placements with organisations, but the most important for me was to also give back to a community that I share a lot with and understand well. Over many years the devastating effect of the civil war cycle especially on women and children, has diminished skilled workers who have either immigrated to other countries or succumbed to the war, for me Somaliland is one of the places that really needs skilled people to be able to contribute to the rebuilding of the country.

When I first arrived, what struck me most was the chewing culture of a green drug plant classified as a mild narcotic and commonly known here as “khat”. Even though I know Somalis are fond of it even back home in Kenya, the situation here is much worse and can only be equated to being a disaster; every street corner of the town is dotted with small huts where you will see many men chewing from as early as seven in the morning and you wonder what time they have for work and their families. However, other encouraging signs that gave me more confidence were the relative peace that is in Somaliland, contrary to what you hear in the media outside the country, secondly the good facilities where you get everything you want like the internet and also satellite communication, the housing designs are among the best that I have seen in my travelling experience and most importantly the weather conditions are much better than I expected. There is a summer, a rainy and moderately cold season, and the people are very welcoming and friendly to foreigners. In fact for me I feel like I am just like at home because of the many friends that I have here. We also have an expatriate community that are very close and in every weekend there are some get together and barbecues that keep to entertain people.

The transfer of skills and knowledge to Talowadag staff, I enjoy when I see an individual member of staff being able to do something that he or she was not able to do by themselves previously.

When Talowadag won an international service human rights award on sexual and reproductive health, it was such a significant moment for the relatively small and young organisation that catapulted it into national and international fame. Currently Talowadag has lots of good will from many international and local organisations working in Somaliland, it was also a big score against stigma and discrimination against people living with HIV and AIDS especially in an isolated place like Somaliland, as we speak now there is an increase in the involvement of people living with HIV and AIDS compared to before. This has also awakened the government to act on issues regarding HIV and AIDS interventions. Talowadag is currently riding on the crest of the award to advocate and win more support on its quest to make Somaliland an HIV and AIDS stigma and discrimination free society.

Patience is very important here in Somaliland. Because of the culture and way of life of the people, it is imperative that however little an achievement you gain from your work, you should consider it very significant. The way of thinking and perception of the people here is very different and as a DW I have learnt to take things one step at a time and integrate my self in to their pace, and it has been very successful.

Talowadag has grown a lot over the last two years, its funding base has increased and there are several ongoing projects compared to one when I arrived, the organisation’s human resource capacity has been strengthened and documentation has significantly improved. Most important is the fact that they have been able to build a good office of their own and have moved there now which is very important in their future sustainability.

The biggest challenge on the HIV and AIDS theme I am working on is the aspect of duplication of efforts. This has been mainly brought about by change of government and secondment of new staff at the commission. The country HIV and AIDS Coordination mechanism needs to be strengthened and there needs be a concerted effort to strengthen the commission and also ensure that trained staff are not changed regardless of the government that comes in place, this will ensure continuity and progress in HIV and AIDS intervention in Somaliland.

I would advocate for regulation of the culture of khat chewing as a habit, just like they do with alcohol in other countries. An individual who is addicted to khat would rather his family go hungry and he buys khat; this has led to negative social factors such as divorce rates, which are among the highest in the world, and suffering, especially to women some who complement their children livelihoods through difficult struggle and in extreme case even engaging in underground prostitution which predisposes them to being infected by HIV.

For my local partner Talowadag, the vision of supporting the setup of networks in the six regions of Somaliland to bring support closer to the people living with HIV and their families is currently ongoing.

The aspect of placing the development worker with an organisation to build capacity and give technical support to the running of the organisation is very key to future growth of the organisation. The skill share transfer ensures sustainability and technical independence to the partner organisation, which helps in cutting costs, such as the costs of hiring expensive short term consultants and future dependence on them.

I would like to inform them to come and see for themselves and judge by their experiences. A development worker does not work in a system of confinement and strict procedures, they are always very flexible and free to implement their ideas and what they think is best for the organisation. This freedom gives them an opportunity to be innovative and come up with approaches that are best suited for the good of their partner needs. The support staff of Progressio are also there to ensure that the necessary means needed for the development worker to do his or her job well are in place and they are very supportive. Finally,  rather than following the media information which may not be necessarily be true about situation of a country like Somaliland, sometimes from my experience it’s good to come and see for themselves, they will be surprised and am sure they will fall in love with the work, the hospitality of  people and the simple lifestyle here, they will also be amazed at the relative peace and stability in the country, hardly do you hear of common things like thieves or burglars here, the people also are very trustful. Lastly, there are strong democratic credentials judging from previous elections conducted here which have served to be model revered by other countries in Africa.

Judging from my work experience, which has lots to do with volunteering, I would like to continue working closely with the people at the grassroots who feel the impact of HIV and AIDS in their daily lives. This is where I believe that I am able to demonstrate impact and empower the poor and marginalised to be able to support themselves and also increase their voice in their communities.