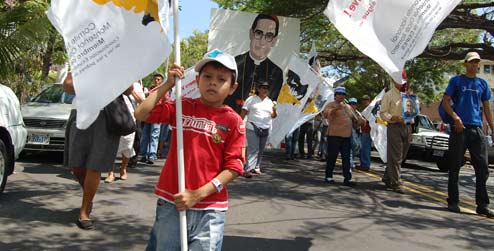 A young boy in El Salvador on an annual march in memory of Oscar Romero.

El Salvador is the most densely populated country in the Americas. Many of its problems today stem from a stark division of wealth between a ruling elite and the majority of the population, many of whom live in absolute poverty.

This is what led to the civil war in the 1980s. Seventy thousand people died. A series of natural disasters followed, leaving 1,200 dead and 1 million homeless.

A change of government in 2009 brought hope, but for many years the popular feeling was that the government had done nothing to address the poverty in El Salvador. There are high levels of crime, and the presence of violent gangs; high unemployment; dreadful labour conditions; low government social investment; continual environmental deterioration; and, despite some successes of the women’s movement, limited women’s rights.

At Progressio we are working alongside the Salvadorean people to help them address the problems they face. We currently do this through the Progressio ICS programme, which places UK volunteers aged 18-25 years with local organisations where they work alongside local young volunteers on community, education, livelihoods or environmental projects.

You can read stories and blogs from Progressio ICS volunteers, and stories from our previous development worker programme in El Salvador, here.

Sections:
Where we work