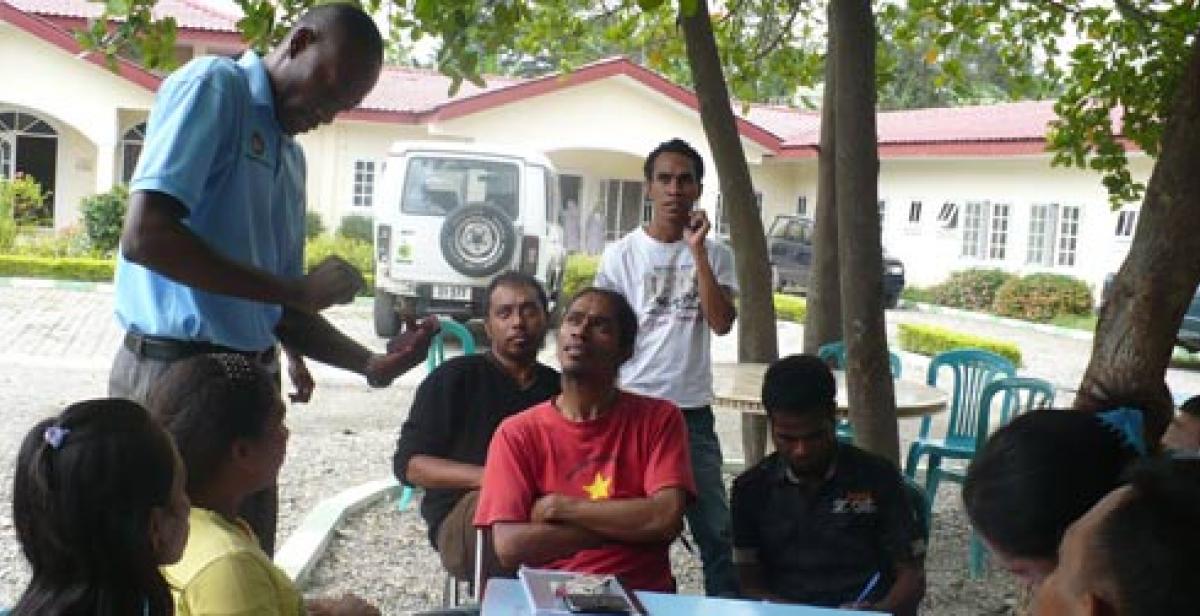 Armstrong is a development worker from Uganda, currently working as a Decentralisation and Citizen Engagement Adviser with the Timor-Leste NGO Forum (FONGTIL) in different districts of Timor-Leste.

Before becoming a development worker in Timor-Leste, I had been working in Papua New Guinea initially as Planning, Monitoring & Evaluation Adviser – Voluntary Service Overseas (VSO) volunteer with Papua New Guinea Department for Community Development for two years, then as Interim Programme Support and Monitoring & Evaluation Manager in VSO’s Papua New Guinea Programme Office for eight months. In Uganda I had worked with international organisations and one development consultancy firm called IMPACT Associates. I have worked in areas of governance, HIV and AIDS, youth development and disability. I hold a Masters Degree in Ethics and Public Management which includes good governance and decentralisation.

First of all because of striking similarities with the VSO model in terms of placements and skill-sharing with the partners. My favourite countries that I had hoped to work in with Progressio were Somaliland and Timor-Leste because that’s were I thought my skills would be much more needed after working in conflict region in Northern Uganda.

When the plane was descending to Dili International Airport, I saw a mountainous landscape which exactly resembled Papua New Guinea where I was coming from. After arriving in Timor-Leste, I quickly noticed that I was among the few tallest people in the country. Later my counterpart whom I found speaking good English asked me whether Africans have relationship with Giraffes... because all of them are very tall!!!! Immediately I burst into laughter and I will never forget his observation.

For sure, I found my country of placement so different compared to initial thoughts considering the oppression and struggle people went through until they got independence in 2002. The place is peaceful, you can walk freely compared to where I worked before and people are incredibly friendly when they open up.

I enjoy working directly with our members and networks from all districts in Timor-Leste. I am a person that enjoys fieldwork more than office based work. Timorese are always inquisitive to learn more and more which I have found more rewarding in the project I am working on (Strengthening Inclusive Local Governance Project). Decentralisation in particular is a new concept to many people in Timor-Leste; sharing with them about how best they can participate in decentralisation process and observing how passionate Timorese are has been enjoyable.

Positive feed back from beneficiaries of my project has really excited and motivated me.

Witnessing 13 District Liaison Officers (DLOs) that I am coaching and mentoring taking a leading role in facilitating follow-up trainings in the districts to member organisations which they had never done before has been my most exciting moment. Most district based NGOs are aware of their clear roles in terms of participation and engagement on decentralisation if the law is passed by national parliament.

Road transport is hampering development in Timor-Leste because to some districts you can take seven hours drive from the city to reach. Timor-Leste is a mountainous country; some roads occasionally are affected by landslides and others are in bad conditions due lack of maintenance. You find most development organisations and agencies congested in few districts with relatively good roads and end up neglecting district which are difficult to access due of bad roads. This challenge if it is not resolved will really create regional development imbalance in terms of service delivery.

Smoking!!!!! It is a very big problem in Timor-Leste even professionals smoke while they are in their offices. Everywhere you will find people men especially, both young and old, smoking, it is difficult for none smokers to attend public gatherings. During workshops, women always push for a “NO SMOKING” house rule but still you find men debating over this with women. In the long run peoples health will be seriously affected, especially children.

The most important for me was the Progressio model of placing few development workers to a maximum of 15. This makes it easy in terms of managing and facilitating development workers well and making significant impact to marginalised communities. In most cases you find development workers attached to specific projects and to me, this makes a clear road map for development intervention and realising specific tangible impacts at the end of the placement.

I would advise them that becoming a development worker and sharing your skills with people from other countries is really rewarding. In my culture we have the saying; “A child that does not move from one home to another, he or she will always think that the mother is the best cook.”  I have shared my skills with different people from different countries and I have learnt new ones because learning is a continuous process. Being a development worker makes you appreciate and identify your key personal qualities while working in challenging environments making a difference to marginalised groups of people.

I see myself continuing working in Timor-Leste hopefully with the same work I am doing when the placement ends. I have moved and worked in all districts and I have realised that there is still much work to do since Timor-Leste is a new country. Timorese especially those working with NGOs are always hungry to learn more and more on issues regarding good governance with special focus on decentralisation. I have found people in Timor-Leste really passionate towards developing their country which gives me courage to keep on sharing ideas and changing lives.