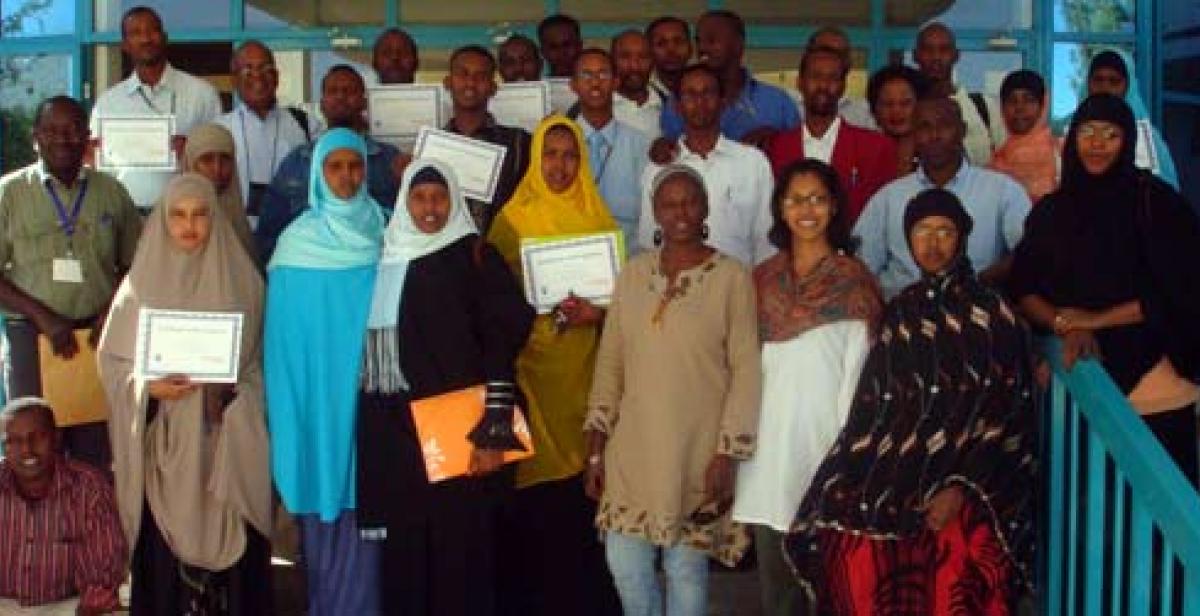 Edna, from Kenya, was a Progressio Development Worker in Somaliland with NAGAAD, a network of 46 women’s organisations, from February 2009 to February 2010.

What have you done since leaving Progressio and what do you do currently?

After leaving Progressio, I worked as a Consultant for MANYO, an NGO based in Kenya. I was involved in managing and coordinating advocacy activities under the women and human rights programme, as well as supporting the organisation in the planning, organisation and implementation of the We Can Campaign Against Gender Based Violence Project Network activities.

I am currently working with the United Nations Mission in the Republic of South Sudan (UNMISS), as a Judicial Affairs Officer. My day-to-day responsibilities include, among others, offering technical assistance to national counterparts in the promotion of the rule of law, legal and institutional reform, enhancing prosecutorial and judicial capabilities and Law Enforcement Officers, with the objective of ending prolonged, arbitrary detentions and establish a safe, secure and humane prison system in the Republic of South Sudan.

Please describe your role and the partner organisation that you worked with as a Progressio Development Worker.

I worked with NAGAAD and its network members and supported them in developing their skills and capacity to undertake successful advocacy initiatives on key issues and develop longer-term advocacy strategies. I also offered support in the promotion of human rights and the increased participation of Somaliland women in the political process and decision-making bodies, and facilitated the organisation’s capacity building initiatives, focusing on Somaliland women in politics. And, finally, I assisted the organisation in establishing networks and linkages bringing together women at regional level and all other relevant actors working towards women's empowerment.

What inspired you to become a Development Worker?

My inspiration in development work started long before I joined Progressio. Back home I often participated in a lot of volunteering initiatives during my free time and this often involved working and interacting with the local community. I believed that being a Development Worker would provide me with the ideal opportunity to make substantive contributions towards eventually achieving my overall career objectives of legally enhancing vulnerable people’s rights and working with organisations and institutions pioneering in the enhancement and development of developing countries, so as to attain political, economic and social maturity.

What struck you most about Progressio’s Development Worker model?

I had previously worked in a similar organisational set-up. Thus, joining Progressio gave me another chance to once again work side-by-side with national counterparts and support them through capacity building and mentoring in order to develop their skills, knowledge and expertise, with the aim of promoting long-term sustainability.

What did you enjoy most about your role, and of your experience as a Development Worker?

What I enjoyed most about my role was the ability to work alongside NAGAAD and other women’s rights organisations in Somaliland and being able to share with them my expertise, skills and knowledge on gender and advocacy issues.

It also gave me the opportunity to contribute and focus in meeting the needs of women and vulnerable groups in the society by implementing long-term solutions to existing problems, in order to help them create the capacity to provide sustainable solutions.

Finally, in my day-to-day work and activities, I met with fellow Development Workers from diverse professional and cultural backgrounds. This turned out to be very useful for me in terms of interaction and the integration of diverse ideas and perspectives pertaining to various development concerns, especially in developing countries, and in turn I learnt from best practices.

What were some of your main achievements while working as a Development Worker?

As a Development Worker, working alongside NAGAAD, I had quite a number of achievements, though my most notable ones included:

And what were some of the key challenges and lessons learnt?

We are all bound to face some challenges in our day-to-day work. In my case, one of the major challenges I faced as a Development Worker was in 2009 when Somaliland was due to hold presidential elections and the election dates kept being repeatedly postponed throughout the year. The uncertain political situation and slow commitment by the then government to the democratic process resulted in a delay in carrying out some of the key planned activities of NAGAAD, which involved working in collaboration with the House of Elders (Guurti) and the Executive.

Through this experience, I learnt that sometimes not everything works out as initially planned and so you have to always stay on top of things - be smart, flexible and prepared with an optional plan in the eventuality of unexpected sudden changes and hurdles.

Did this experience change you as a person in any way?

As a Development Worker, I had the opportunity to interact with the local community in their day-to-day work and life. For me, this served as an eye opener to the many challenges faced by our brothers and sisters in other developing countries. This experience fuelled my appreciation for the many things in life that we often take for granted.

Did your experience as a Development Worker influence your career/future direction, and help you to get to where you are today?

It made me proud of my achievements in Somaliland, however small. It also gave me the opportunity to expand on my skills, knowledge and be prepared to take on challenging and exciting roles in my career. Hence, after leaving Progressio, I was much more experienced in my area of expertise, more open minded and flexible enough to ‘think outside the box’ and this has played a major role in getting me where I am today.

Being a Development Worker is one of the most enriching and rewarding experiences one could ever go through in life. It may sometimes be tough and challenging, but I always looked at the bigger picture. I got to meet people from different backgrounds and cultural set-ups, I got to contribute both to the institutional and capacity development of NAGAAD and its network members and, last but not least, had an amazing time interacting with the local community and sharing experiences. In the end, I learnt a lot on a personal level, changed people’s lives in my own small kind of way and enhanced my growth professionally. Looking back, I cannot help but marvel with pride at the person I am today, thanks to my experience as a Development Worker with Progressio.