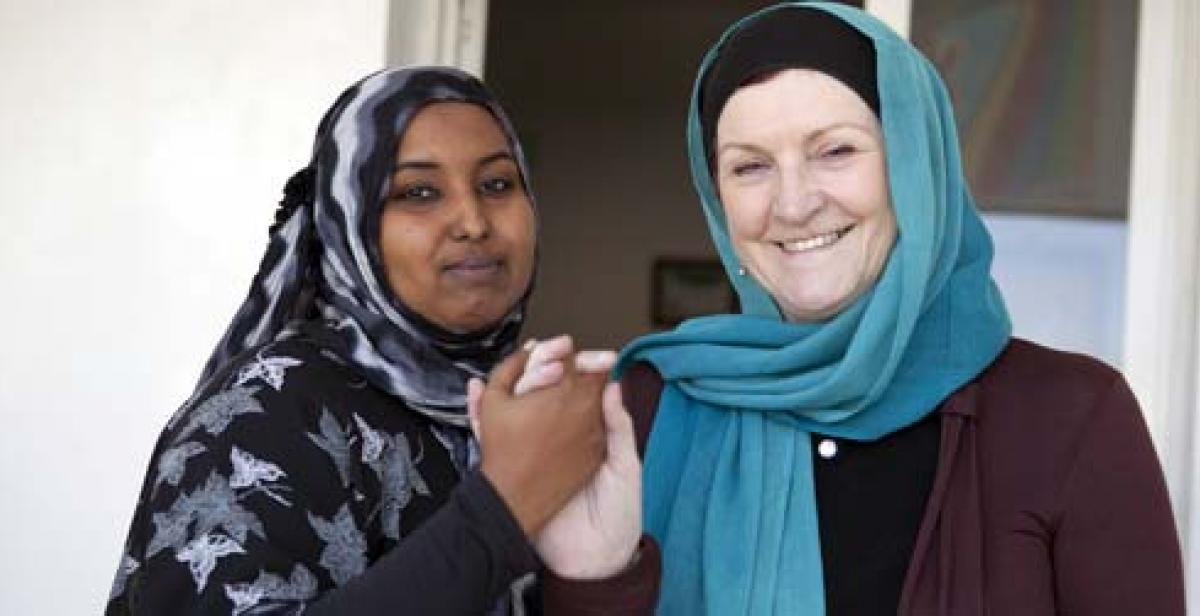 Dr. Joanna McMinn, from Northern Ireland, was until recently working in Somaliland as a Project and Organisational Development Adviser, alongside Nagaad (a network of women’s organisations).

My work background is in the area of women's empowerment. I began my career in community-based adult education for women living in disadvantaged working class areas of Belfast. From being a sole worker in a new project, I developed the organisational systems and structures to create an established and well respected women's organisation. From there, I undertook academic research into the area of women's education and its contribution to social change, which led me to take up the position as the Executive Director of the National Women's Council of Ireland. During these years, I undertook training in the development of organisational systems, both in Ireland and internationally.

I wanted to work in solidarity with women in another country, and when I saw the advertisement for a Development Worker with Progressio, I was inspired by the purpose of bringing professionals with expertise in specific areas to support organisations in developing countries. In particular, the placement that I applied for brought together the important issue of women's political representation and the need for capacity building in organisational development, an area in which I have considerable experience and expertise. I felt I could truly be of service to Nagaad, and to women in Somaliland in this role.

My first memory of arriving in Somaliland was flying over the arid landscape in a small twin propeller airplane and landing on a desert landing strip at Hargeisa airport. After arrival, we drove a short distance to the hotel where my living quarters were to be based. As we passed the camps for internally displaced people, I became forcefully aware of the high level of poverty that many in Somaliland endure.

What has made the biggest impact on you?

The harshness of the environment has made a big impact on me. The overall poverty of the country is evident in the lack of infrastructure, for example the limited availability of water, limited health services, the high rate of illiteracy, particularly among women, and also the poor roads, even in the capital Hargeisa. But over and above all these things, the warmth and sociability of Somali people is what I love and appreciate about working in Somaliland.

I enjoy being of service to Nagaad, and have enjoyed introducing templates for organisational systems that will be useful after I leave. In my role as an Project and Organisational Development Adviser, I have been particularly pleased that I could offer skills training in leadership, drawing on internationally tested and accredited, high quality training materials. This has been greatly appreciated by the members of Nagaad, the staff, the Board and also other partner organisations of Progressio who have undertaken the training.

Going shopping in Hargeisa, both to the vegetable market and clothes shopping. I love the colours and patterns of Somali dress materials and have gathered a collection of beautiful scarves that I shall always have as a reminder of my time in Somaliland, and of dressing in keeping with Muslim culture.

I have learned about the commonality of women's experiences worldwide, alongside (and despite) cultural differences and material inequalities. It has been so instructive for me to live in a conservative Muslim society and appreciate the religious values that people hold dear, as well as clearly seeing the subordinate position of women within the clan culture of Somaliland.

The biggest change I have witnessed is in the numbers of women coming forward as candidates in the local elections. In 2002, only 10 women stood for election in the whole country. In November last year (2012), over 140 women stood for election. There has been a great deal of awareness-raising carried out by Nagaad and other civil society organisations about women's right to political participation, and it is having an impact.

What is the biggest development challenge facing the country where you are working?

The biggest development challenge that Somalilanders face is not having international recognition as an independent and autonomous country. There is international pressure for Somaliland to join with Somalia and the Somaliland government have to date resisted this pressure, the consequence of which is not having access to international aid. I have learned of the resilience and initiative of people here, and their pride in their independence.

For me, the key to women's development in Somaliland is education. So the change I would like to see is an increase in the level of education that girls and women receive, and the number of years they spend in education. I'd like to see a change in government policy to prioritise girls and women's education, both at primary and secondary level for this generation, as well as adult education and, particularly, effective literacy programmes for adult women. Of course these all take resources, which is a difficulty for the Somaliland government.

I would like to see a national literacy campaign for the whole population. Interestingly, in the 1970s there was a national campaign, inspired by the success of Cuba. So, at one time, all Somalis could read and write. That was under a socialist regime, but the civil war brought it to an end.

What strikes me most, and the reason I applied, is that the model aims to put the professional experience and expertise of Development Workers at the service of partner organisations and their constituent groups. It is a model that is respectful of local organisations, and placements are developed in collaboration between Progressio and its partners.

To maximise the rewarding role as a Development Worker, it is worth thinking through the portfolio of skills and expertise that you can offer, and be willing to be responsive and innovative when you are in the organisation. Stay aware and respectful of the cultural context, be open to learning, and adapt. You need to be happy in your own company, because you will spend a lot of time on your own outside of working hours.

I am joining an international consultancy group. The placement with Progressio has helped me enormously by giving me on the ground experience of international development work in a post-conflict, strict Muslim society, and in one of the harshest environments in the world.