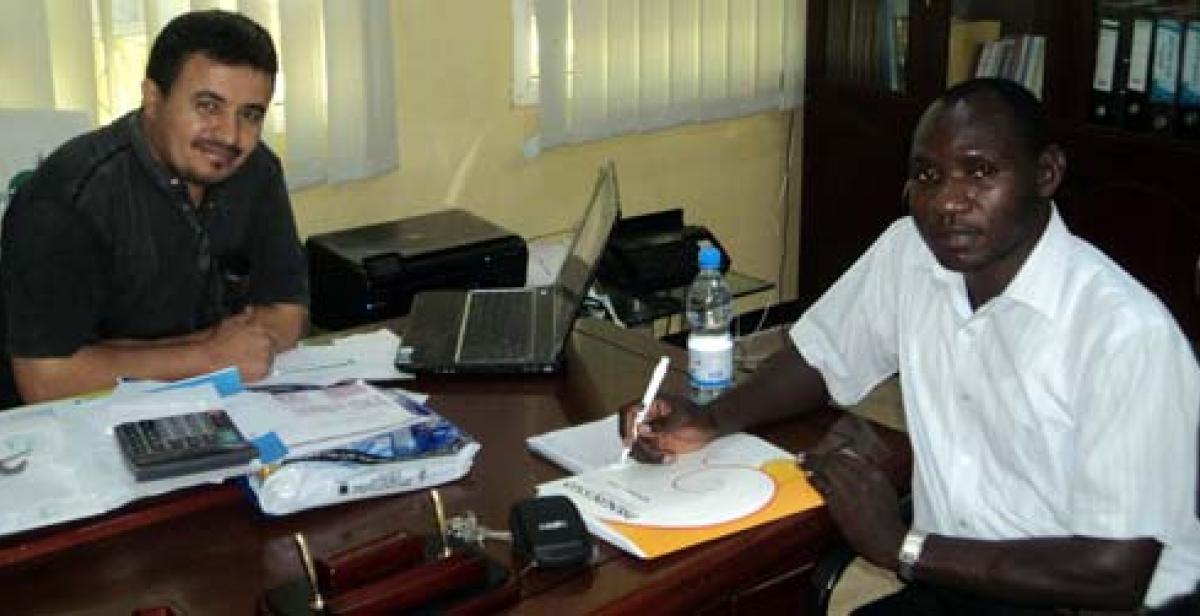 Joseph (on the right) with his colleague from the partner organisation.

Joseph, from Kenya, is currently working as a Local Administration and Participatory Planning Adviser, alongside the Reach Out Foundation for Human Development, in Yemen.

Initially I worked with the Red Cross in my country, Kenya. In June 2008 I became a VSO volunteer, working as an Organisational Development Adviser with a local partner NGO in Nigeria. During my volunteer placement, I came across an advert from Progressio for a Development Worker placement as a Civil Society Organisations Capacity Building Coordinator in Yemen. I applied and took up the placement in October 2009. It ended in July 2011, when the political upheaval around the ‘Arab Spring’ meant that all international development workers had to be evacuated for safety reasons.

In the first placement, I was inspired by the desire to share skills, knowledge and experience while contributing to improving the lives of ordinary people in the world. The striking similarities between VSO and Progressio also played a major role in attracting me to become a Development Worker.

The second placement has been largely influenced by my very successful experience in the first placement. This explains why I found it easy to return to Yemen a second time despite having left abruptly at the height of the revolution.

Also, I felt that with the additional knowledge I had acquired during the one year outside of Yemen, I was better placed to return to the country and contribute to nation building after the chaos that caused regime change. I also thought that it would be a great opportunity to build on the foundation I had laid during my previous placement since the second placement would advance the cause of advocacy and good governance.

Can you tell us about your former placement with Progressio in Yemen?

My former placement was with Abu Musa Al Ashary Social Charitable Association in the Hodeida governorate. I worked as a Capacity Building Coordinator in which I was responsible for providing technical support to 15 local NGOs in organisational development, networking and advocacy.

The placement was challenging but very enjoyable. I had found the capacity of the local NGOs to be very low and the trust among them was elusive as most competed against one another. I embarked on a long journey to build not only capacities but also trust among the different partner organisations in order to achieve the goal of coming up with a network of local NGOs.

I am very proud and glad that not only did I realise the goal of forming a network but also gave the 15 local partner organisations a strong foundation on which to build their advocacy work. In addition, I made lots of friends who were also at the forefront in demanding for my return to Yemen.

Looking back, I can say that I have learnt a lot from the first placement in Yemen. It gave me an opportunity to live in the Middle East for the first time in my life. I learnt to appreciate cultural and religious differences more and how important it is to be tolerant to others' views.

What was the first thing you noticed when you returned to Yemen for your second placement?

The first thing I noticed upon arrival was the tight security. The violent revolution had caused lots of security concerns and the security teams were not taking anything for granted. I also noticed that as a result of the revolution, the rate of inflation had risen very tremendously. The cost of living had shot to the roof. In addition, electricity and water supply had become unreliable.

The opportunity to provide advice, mentoring and capacity building to partner organisations on the ground.

The visit to our project by the British Ambassador to Yemen, Mr Nicholas Hopton, in September 2012. This visit was to assess the progress of the Foreign and Commonwealth Office (FCO) funded project called ‘Combating Discrimination Against Women in Hodeida’. The visit was also boosted by the presence of the Governor of Hodeida. A strong case for women’s empowerment and gender equality was put forward by the two leaders.

Change is inevitable. Nobody ever imagined that there would be a regime change in Yemen through a revolution. Again, as Victor Hugo notes:

“When dictatorship is a fact, revolution becomes a right.”

“There is nothing more powerful than an idea whose time has come.”

During the first placement, I supported nine partner organisations to develop a two-year project on Female Inmates Capacity Enhancement (FICE). This particular project is currently in its second year of implementation and is being funded by the European Commission. I must also say that as a result of my placement in Hodeida, the Civil Society Organisations Forum has been formed and registered as a network organisation.

What is the biggest development challenge facing Yemen and the theme you are working on?

The biggest development challenge facing Yemen is poor leadership. The country is currently in a transition following the Arab Spring, which led to a change of regime at the end of last year. This transition period, expected to last for two years, is being used to rebuild the state, which has been greatly affected by the aftermath of the revolution.

Governance is currently very poor and most of the citizens are not fully participating in the affairs of the state. Corruption and lack of transparency and accountability on the part of political leaders and government officials has alienated and disillusioned the citizens, so much so that the youth who actively participated in the revolution feel marginalised and shortchanged. Therefore, a concerted effort is needed to empower the citizens to voice their concerns and fully participate in the governance of the state. This is what my placement aims to address.

If I had the powers, I would change the culture of Qat chewing! This wastes a lot of resources, including time, water, land, money and manpower. It perpetuates the cycle of poverty and food insecurity.

This model promotes skill-sharing and sustainable capacity development. By living with and among the local community, the Development Worker becomes a member of that community and can therefore learn more about the challenges and needs in the community and engages the community in a participatory way to find local solutions to local needs. Therefore, there is two-way learning through skill-sharing since the Development Worker does not have all the answers to the local problems.

Be open-minded and non-judgmental. You need to be very patient and understanding. Remember that living in a different culture provides opportunities to learn about other cultures as well as challenges that result from cultural differences. Striking a balance between your personal beliefs and other people's is key to a successful and enjoyable placement. It is a worthy undertaking that will not only enable you to interact with people from different backgrounds and cultures, but will also broaden your world view and make you a global citizen.

I hope to continue working on good governance and sustainable development within the civil society. I also expect to get higher responsibilities and greater challenges in this field either in another established organisation or establish my own organisation in the near future. This placement is providing me with very important skills and experience in good governance and organisational development, which I hope to put to good use in my future career.