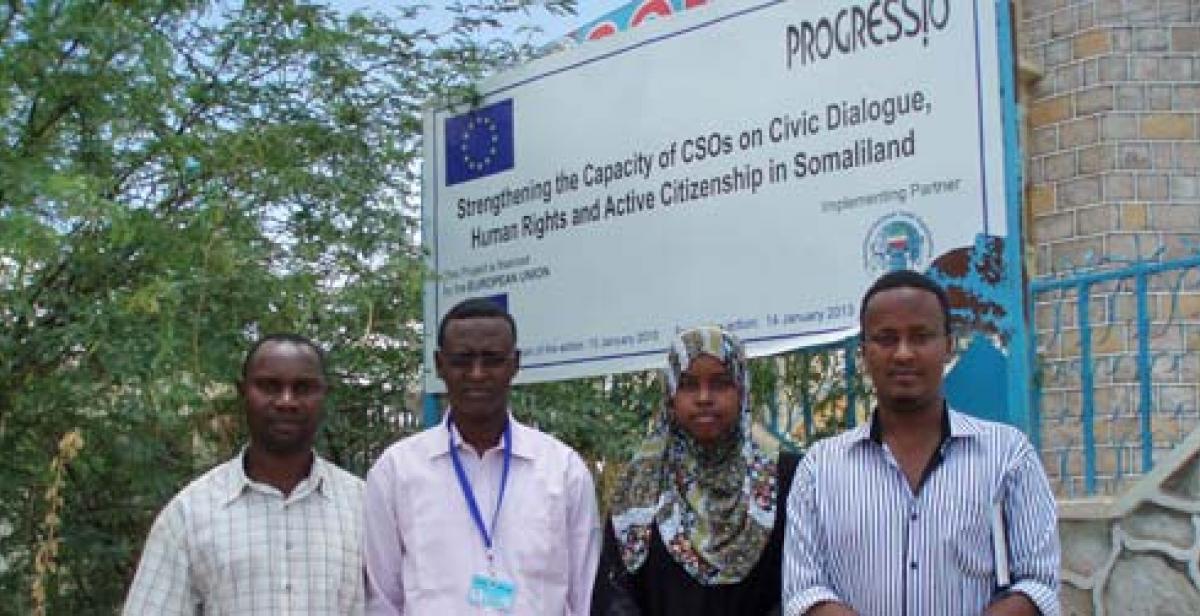 Kule (on the far left) with colleagues from SONYO

Kule, from Uganda, works as a Programme and Capacity Building Adviser, alongside the Somaliland National Youth Organisation (SONYO).

What did you do before becoming a Development Worker?

Before I joined Progressio in early 2012, I was working as a Market Development Officer with Volunteer Efforts for Development Concerns, which supports small holder famers in Uganda. Before that, I worked as an Advocacy and Awareness-raising Adviser with Voluntary Services Overseas (VSO) and as a Disability Rights Adviser with the African Commission for Human and Peoples Rights in The Gambia, West Africa. My role with VSO involved supporting the Gambian disability movement in policy advocacy, research and awareness-raising, aimed at changing attitudes towards disability and local fundraising.

My inspiration to join Progressio was a desire to contribute to humanity in a post-conflict environment. This was coupled with Progressio’s approach of ‘people powered development’, where people work alongside others to deliver sustainable development through sharing experiences, knowledge and skills. This approach is very similar to my previous experience. I therefore saw this placement in Somaliland as very fulfilling in terms of my goals, and one in which I thought could make a difference.

There are three intriguing things I vividly remember when arriving in Somaliland. 1) The selling of money on the streets in big bundles – I am used to money being kept in a bank and to changing money in a forex bureau or a bank. 2) A big proportion of the population chewing Qat – a semi narcotic drug. 3) A driver stopping their car in the middle of the road to have a casual chat with a friend causing a traffic jam of vehicles behind him, including ours, and nobody being bothered.

The chewing of Qat was very intriguing to me in the sense that both young and old, low and high profile people are trapped in it. This made me very interested in reading about how it affects the economy. I also made personal investigations to find out whether there could be a possibility of preventing young people from chewing Qat. Qat, which is imported from Ethiopia and makes up a third of the total imports into Somaliland, impacts negatively on family life and stopping it is almost next to impossible here. In Hargeisa, the cars that carry Qat from Ethiopia have a free right of way, like a hospital ambulance, somewhat of a cultural shock to me.

I enjoy a supportive team at SONYO. The Executive Director has been the most outstanding person and has created a good work environment that enables me to exercise my professional expertise.

The most exciting moment while at the placement was when a project proposal I wrote together with staff while coaching them was approved by a donor. That day, SONYO’s Programme Coordinator remarked “hard work can really change the world”.

Another good moment was when the staff at SONYO passionately stated that the work I did with them to have a ‘reasonable’ Strategic Plan that they understand was very fascinating and that they learnt a lot in the process. I had a good night’s sleep that day.

I learned that in a post-conflict environment, one needs to understand whether they are working ‘on’ conflict, or ‘in’ conflict, or ‘around’ conflict, so as to tailor programmes based on such an understanding. I also learned that understanding people you are working with, and where power lies and how decisions are made and who influences those decisions, is important in identifying which staff you can work closely with in order to achieve what you are there to achieve.

I have seen how the Strategic Plan development process significantly influenced the restructuring of the whole organisation, so that the right skills and resources are allocated to the relevant areas. This was as a result of using a participatory approach where a lot of people are valued and called upon to come on board in the process to agree on a win-win situation.

Another change I have witnessed is the enhanced confidence of a staff member in respect to project proposal writing. He developed a bankable idea into a project concept note and said “This is my first time to develop a project concept note and submit it to a donor with little support and all is because of our Development Worker who has always showed me details on proposal writing”.

What is the biggest development challenge facing Somaliland and the sector in which you are working?

The biggest problem facing the youth sector in Somaliland is pervasive youth unemployment. I think people did not realise before that other social issues, like growing youth violence, rape, chewing of Qat, etc, are majorly because a large section of the population are youth (70 per cent) and of which 75 per cent are unemployed, with little access to livelihood and education opportunities.

One thing I would change would be to avert youth unemployment through skills development, high quality education and creating youth livelihood opportunities that would provide young people with employment. This would increase hope for young people. They would realise that if violence erupted, there is something they could lose. It would reduce their sense of helplessness and frustration and this would address a lot of problems, including there would be lower levels of crime and less time to chew Qat, and greater hope among the youth would make them reduce their involvement in criminal gangs and extremist groups.

I have seen projects developed and implemented by Progressio, in collaboration with its partners, in which Development Workers have a huge impact on the lives of the people as they use the methods of constant coaching, mentoring, and training on the job, leading to effective project delivery and reducing the misuse of resources. Sometimes donors rely on us, the Development Workers, in terms of overseeing and supporting the interventions they fund.

They need to respect the colleagues they are going to work alongside and refrain from thinking that they are the ones who know. There is a wealth of experience that they will find in their colleagues and they could learn something from them. When a Development Worker delivers their expertise to support partner organisations to close the capacity gaps the organisation has, they need to do it with a sense of humility. This makes staff feel closer to them and would make it easy for the placement objectives to be achieved.

Another good thing to do is to network with other Development Workers in-country. Development Workers are a centre of expertise, which you can tap into a lot for your placement and future career. They are also helpful in sharing ‘survival tactics’ away from home.

I see myself reviving my consultancy firm and network with Development Workers with particular expertise to participate in this firm. Progressio has exposed me to a team of experts, especially in Uganda and Kenya, people I can easily work with on consultancy work. When I began the firm in early 2007, I did not know a lot of people with diverse experience on which to rely.