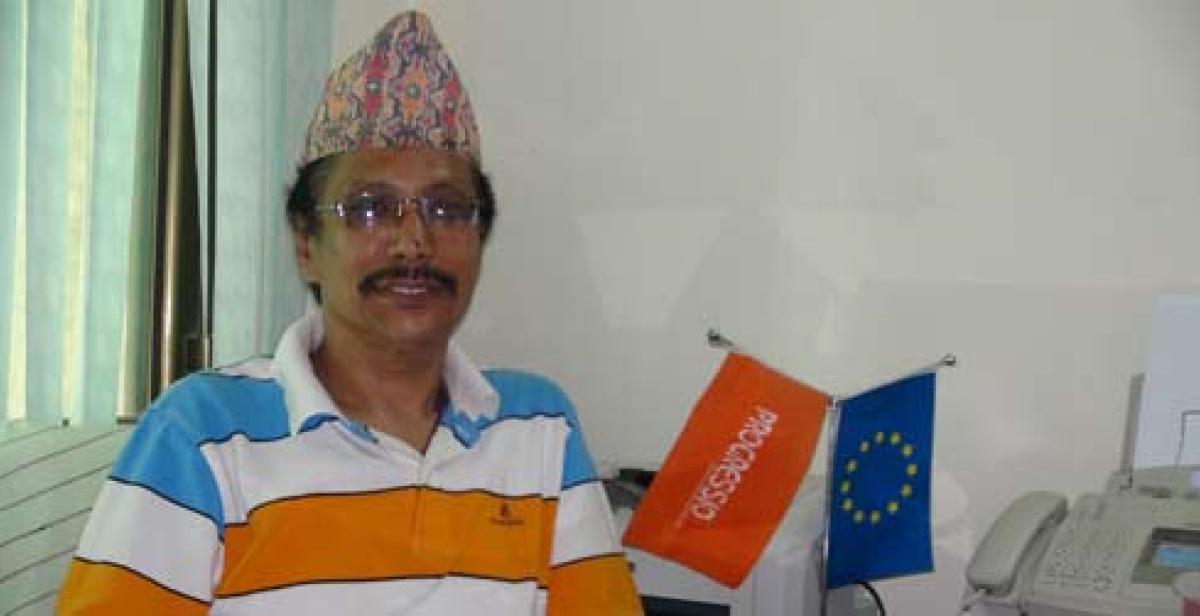 Prachanda, from Nepal, is currently working in Yemen as a HIV and AIDS Trainer, alongside the Abu Musa Al Ashary Charitable Association.

My educational background is in public health. Professionally, I am a trainer. Previously, I worked on the National AIDS Programme in Nepal. For six years, I worked as a United Nations Volunteer in Botswana with the District Multisectoral AIDS Committee in the Mahalapye sub-district, coordinating responses to HIV at district level. I also worked for four years with the Botswana Network of People Living with HIV and AIDS, building the capacity of this network and people living with HIV. This included developing programmes, resource mobilisation and the implementation of projects related to the prevention of HIV and to the care and support of people living with HIV.

Having a background in international volunteering led me to search for organisations that serve people’s needs, irrespective of race, faith and geographical boundary. I found Progressio to be the ideal organisation for me.

I found that almost everyone in Yemen, young or old, had swollen cheeks. I was shocked by this. Later I understood. It was due to Qat, a mild narcotic that they chew and keep for hours inside their mouths, keeping people busy in the market and men out of the home with friends and family members.

Surprisingly, business in Yemen is flourishing but Qat is considered as one of the main causes hampering development in the society. It replaces cash crops like coffee and 35 percent of the total irrigation of water is consumed by the cultivation of the Qat plant alone. Furthermore, Qat consumption like any narcotic leads to various health hazards, the loss of a productive work force and creates an internal circulation of cash that does not contribute to the national economy

As a change agent, I have the opportunity to work with community-based organisations (CBOs), fishermen, drivers, barbers, men who have sex with men, female sex workers and people living with HIV at the field level, with stakeholders at the governmental level, and also with local councils and other bilateral and international NGOs at the governorate level on advocacy. This gives me the satisfaction that I am able to bridge the gap for those in need.

There has been a significant change in the field of HIV and AIDS since I joined. The work has become a part and parcel of many sections of Yemeni society, like faith-based organisations, CBOs and government departments, which previously only considered HIV and AIDS as a health problem.

Yemen has been through political turmoil recently. Last year, the situation became so serious that Progressio decided to evacuate me. After the security and political situation had improved, I was called back to work with Abu Musa Al Ashary again and I took this as a recognition of my work with Progressio.

Another exciting time for me was when I was offered a placement by Progressio working in the field of women’s rights, as this has given me additional work experience. In this new project, Combating Discrimination Against Women in Hodeidah, I was involved from the initial project planning phase. This gave me an opportunity to not only share my technical skills but to understand in greater detail the situation of women in Hodeidah, Yemen.

To bring together all our beneficiaries, like fishermen, drivers and people living with HIV, to work as a team is really difficult work. Each group has their own concerns and priorities in terms of their work and livelihoods.

In the beginning, Yemenis used to deny the existence of HIV and AIDS. They considered it ‘a problem only affecting the West or Africa’. They used to say HIV and AIDS is ‘a consequence of improper sexual behaviour’ and Muslims do not indulge in such behavior as it is ‘haram’ (prohibited). Denial and stigma was rife. I saw a father not allowing his son to return home because he had contracted HIV in Saudi Arabia and a person being expelled from their village because the villagers had found out about their HIV positive status.

What is the biggest development challenge facing HIV and AIDS work in Yemen?

As Yemen is a country with a low prevalence of HIV, many international donors do not see it as a priority country. Even the intervention of the Global Fund to Fight AIDS, Tuberculosis and Malaria is just limited to surveillance and treatment through Antiretroviral Centers. Also, the Yemeni government has other priorities, including security, stability, and other developmental issues, particularly as the country is going through a transitional period after last year’s upheavals. This situation is making Progressio’s work in the field of HIV more important and demands more funding and the expansion of this work.

If I could change one thing, that would be the status of women in Yemen.

Yemen ranks last out of 134 countries in relation to the gender gap index (World Economic Forum, 2009). According to the index of political empowerment of women, Yemen ranks 131 out of 135 countries. Only 0.5 percent of local council members are women and only six out of 178 judges in the Appeal Courts are women. Child marriage and early child bearing is culturally tolerated and traditional leaders do not promote positive images of women in society.

The essence of Progressio’s Development Worker model is that it is irrespective of faith or race, instead sharing international experiences to enhance people powered development.

What would you say to someone who is thinking of becoming a Development Worker?

I think I will not retire from community work until I have to. The door at home or abroad is open, especially in the area of HIV and AIDS. And of course credit goes to Progressio’s country programme staff in Yemen who are helping me to meet my career aspirations.

Is there a story you would like to share about someone you have helped that will always stay with you?

Samira, 26, a widower from Hodeidah who faced stigma and discrimination from her own family and friends, got in touch with Progressio’s HIV and AIDS project with Abu Musa Al Ashary. She attended Voluntary Counseling and Testing sessions, trainings on HIV and AIDS, and received a small grant. She can now stand confidently. She can sleep without fear. She is happy and has hope for the future:

”Today I can face difficulties”, Samira says. “I am proud of my life achievements. My life changed for the better. Today I can say ‘my future is my choice’.  I have a project, I have money, I help my family…my best present is my son, he is HIV negative, and he is my hope.”