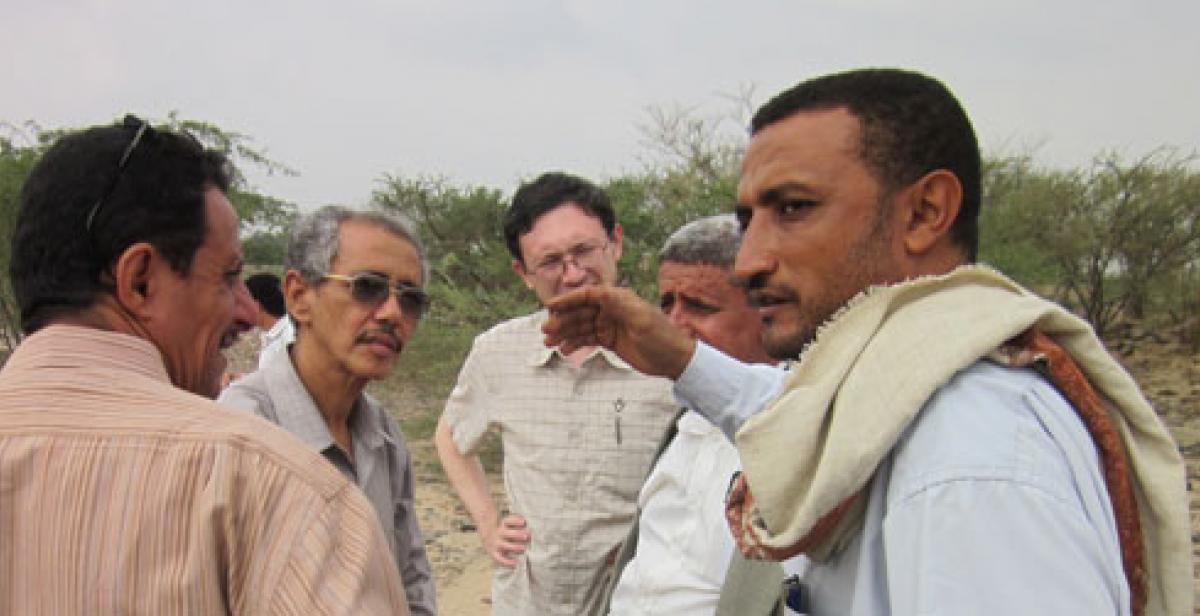 Yemen is a pretty dry country, so the people here really have to make the best use of every single drop of water. Progressio development worker, Derek Kim, goes in search of local innovations to make the most of Yemen’s limited water resources.

Wadi is the Arabic word for Valley and Wadi Zabid is one of the major agricultural production regions in Yemen, some 50 miles south of Al-Hodieida on the Red Sea coast. It’s mainly bananas and sorghum that are grown here, supported by spate flows during the rainy season and water from the shallow groundwater aquifer. Spate irrigation is an ancient technique that has been used in Yemen for thousands of years to harvest and manage sudden floods originating from sporadic but intense rainfall.

I was visiting Wadi Zabid with the objective of finding points of potential collaboration with the Spate Irrigation Network and our local partner the Yemeni Society for the Protection of the Environment as part of Progressio Yemen’s new water project. We’re hoping to work together on research, planning and increasing awareness about water and environment issues.

During our visit we had an ample opportunity to walk and talk with local farmers. As we walked and talked we’d have informal conversations that gave us additional insight into the information that we collected through questionnaires. We discovered several issues and problems that the farmers were experiencing and which they, nor ourselves, did not have easy answers for. Despite these challenges, I was struck by the knowledge of the farmers of how the environment was changing around them.

One farmer, Mohammed, who lives in the downstream area of the wadi, explained some of the challenges he was facing. “Only sorghum can be grown here as it does not require a lot of water,” he told me. “Groundwater can only be pumped for an hour to an hour and a half before the groundwater in the shallow aquifer runs out. But 20-30 years ago this was some of the best and most expensive land in the wadi. Even bananas were grown here.” Unfortunately, unfair distribution of spate water and overuse of groundwater resources upstream, especially to grow bananas (which have a high market value, but are water intensive crops), meant that the water resources downstream were ever decreasing.

Upstream, production shifts and changes in demand for products also had an effect. Another farmer, Sulieman, lives in the midstream area and grows bananas. He noted the problem of depleted groundwater resources further downstream, but also explained that there has been a shift back to sorghum – a traditional subsistence crop in Yemen. “Sorghum is not so water intensive and it is very useful because humans can eat the grains while animals can eat the stalks as fodder,” explained Sulieman.

The very first step in finding appropriate interventions to improve water management is listening to the people. Speaking and listening to the farmers’ points of view was an excellent chance for our nascent water project to find its feet. It is my hope that Progressio Yemen, along with our partners, can continue work in Wadi Zabid to help local people find local, sustainable solutions for their problems.

Oh, I saw this picture today

Oh, I saw this picture today in the lecture Derek Kim The coach Derek Kim explains PRA for members of Yemeni Society for the Protection of the environment local partner and referred to the visit to the Valley of Zabid he said :you look at how we share and discuss and learn from farmers it the spirit of fun with people and the spirit of listening to Derek Kim!

Amazing , first of all , I want to thank Mr Kim and Progressio Interests for poor people needs , specially Mr Kim who spent his value time to offer a useful assistance of water solutions to benefit instead of overuse the water , and really appreciated your thinking to find an innovation on behalf of farmers , I thank here too Yemeni Association for protection of environment Manger Nashoan Al absi for supporting the Progressio worker Mr Kim during his visit here in Yemen and warming welcoming ... finally looking forward toward you you find an easy simple way and technique of spate irrigation in soonest time . welcome to Yemen !!

warming Regards
Member of Yemeni Association for protection of Environment .

To help local people in

To help local people in Wadi Zabid, and to find sustainable solutions to their problems.

In my opinion I think that we must do the following:-

1 - Activating the decisions and activate the water and the environment related to drilling wells and the reduction of the arbitrary digging of wells
2 - Educate farmers in the rationalization of water use
3 - To assist farmers to provide irrigation systems, modern and affordable
4 - Setting up of users of irrigation water
5 - Setting up of users of drinking water projects
6 - Training and rehabilitation of water user groups to manage water resources
7 -Campaigns, advocacy and support for the activation of an environmental and water laws
8 - Focus on the media to show these laws and published