“Towns, municipalities, countries … nowhere moves forward if women don’t participate. Between all of us, we create development.”

These were the words of my fellow Progressio development worker María Martínez in the closing ceremony of a competition to promote women’s participation in the eastern department of Morazán, El Salvador, in April of last year.

That day over 200 women from 26 municipalities of Morazán came together to present approximately 30 different project proposals to promote the participation of women in their communities – and to compete for the opportunity to receive funds to implement their project. This was the second contest that María held with Progressio partner organisation PADECOMSM during her two years with them as a development worker. I attended as a judge in the competition, and was inspired and excited to see all of the proposals.

Since September last year, María (who prefers to be called "Mayita", a nickname given to her by Aymara indigenous communities with whom she worked closely for many years in her home country of Bolivia) has been working with Progressio partner organisation Fundación Maquilishuat (FUMA). Mayita brings her 12 years of experience in citizen participation to the work that Progressio supports for a sustainable environment.

FUMA works on  public health and environmental issues. For the past 15 years, they have worked in the Olomega Lake region in eastern El Salvador, which was declared a Wetlands of International Importance site under the international Ramsar Treaty. Progressio development workers have worked in the region for nine years on water purification and risk management issues alongside local governments and residents, due to extreme flooding that occurs during rainfalls.

“Currently with climate change and the natural weather events that are occurring, it is necessary that local governments and communities take action to mitigate and prevent the impacts of these events,” Mayita commented one afternoon as we sat down to talk about her work and Progressio’s recently-coined term of  Environmental Citizenship.

“During these last rains in October, everything got out of hand, which is further proof that shelters, evacuation strategies, and community organisations need to be included in local development plans constructed with citizen participation to enhance local capacities in the face of these events.”

Citizen participation is never one thing or another – either weak or strong or nothing at all. It’s very fluid. The relationship that citizens have with local government ebbs and flows depending on what the communities are experiencing and how dynamic, active, accessible, and transparent government entities are. Mayita emphasizes: “Exercising the right to citizen participation is the duty of both the citizens and the government.”

Traditionally in local NGO culture, citizen participation is limited to a passive role, says Mayita: “Women and children paint a mural, for example, or take photos, and that’s it. But in these situations, the citizens don’t play an active role. They play a passive role.” But, says Mayita, it is much more sustainable to create spaces and opportunities for active citizen participation that build leadership, set up initiatives, and do not create dependency.

Mayita notices a certain level of reflection and awareness regarding environmental issues in El Salvador. “Many people are reflecting on their daily practices – what they do with trash for example, or how they make use of natural resources – and how their actions affect the environment and the livelihoods of future generations.” In addition, there are advances in evacuation practices, shelter coordination, and communications during natural climatic events that prevent them from becoming disasters.

“In our work with FUMA,” she says, “we have facilitated a lot of positive educational processes in the Olomega Lake. In community forums, people discuss practices that are harmful to natural resources and others that are more Earth-friendly, which results in new initiatives for rational water use, solid waste management, and consumption. We see more of a shift in how we relate to nature, and how the local governments support those shifts …  with these kinds of actions we are going to be able to adapt to climate change, and without them, it’s very difficult, no?”

One method that has worked for Mayita in promoting environmental citizenship is holding contests. “In the first contest, we started with a general call for people to make project proposals to increase citizen participation on a local level. The most innovative, plausible, and far-reaching proposals were chosen and the prize was to supply the small amount of money necessary to implement the project.”

The second contest was the one for women’s participation that I mention above. That was when Mayita first started seeing environmental themes as a trend in the proposals. “There were proposals based on literacy promotion, craft production, agriculture, natural beauty products, and more … but within this diversity of proposals, you can see general concern about environmental issues. Civil society is showing that they are worried and called to take action to protect the environment. It’s a start.”

In the most recent contest Mayita did with FUMA, called “Let’s exchange trash for educational materials,” students and teachers from 11 schools in the Olomega Lake region participated, along with parents and community members, health promoters, and local government officials as judges, totaling approximately 1,500 people. 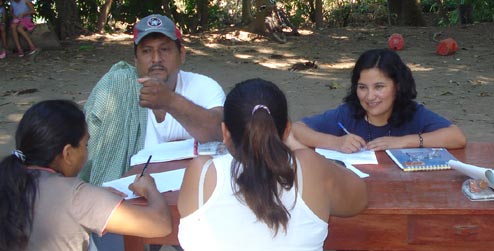 “It was really about trash collection. When people collected huge piles of trash they realised that that trash goes right to the lake. The contest raised consciousness about the need to reduce consumption.” In the lake region, there is no organised system of rubbish collection. Municipal solid waste management is party-affiliated, so if one community does not support the political party of the current mayor, the trash truck does not pass by. This is another issue that can be resolved through increased citizen participation.

To be able to participate in the competitions or implement proposed activities, there is a certain amount of coordination necessary between communities and other local actors. "It becomes necessary to look for support from people who are knowledgeable in health, education, or other themes for the communities to put their proposals into place. In addition, the citizens begin demanding that local authorities fulfill their functions and do their job as laid out in municipal legislation."

The contests also helped to spark fundraising for the schools. “Another thing they realised is that they could collect funds by collecting trash to then sell and recycle. And since schools have very few resources, they could buy educational materials that they need.”

“To promote citizen participation and environmental citizenship, there are two key points. One is that you must have a conviction to do this work. You have to believe that participation is possible, trusting in the people.

“The second is that you have to share clear and verified information, and also have respect and appreciation for the people. People are very astute, they watch to see if you are going to fulfill your responsibilities or not,” says Mayita.

Ultimately, putting these key points into practice and creating interesting and participatory activities, new dynamics are created in how citizens exercise their human rights. People begin to question the traditional logic that development comes from the top down, and begin to realise that they themselves are the key players in exercising their rights. Local authorities stop looking at citizens as beneficiaries of their actions, for whom they are doing a favour by doing their job, and instead respect and dialogue is generated.

“Everything that the law does not prohibit is allowed, so civil society members have to keep this in mind as they make proposals and get creative in ways of solving the problems they face in their communities.” These are ways to create adaptation and resilience from the bottom up. It’s a slow process, but a sure one!