Home » Somaliland: We call on the President

Somaliland: We call on the President 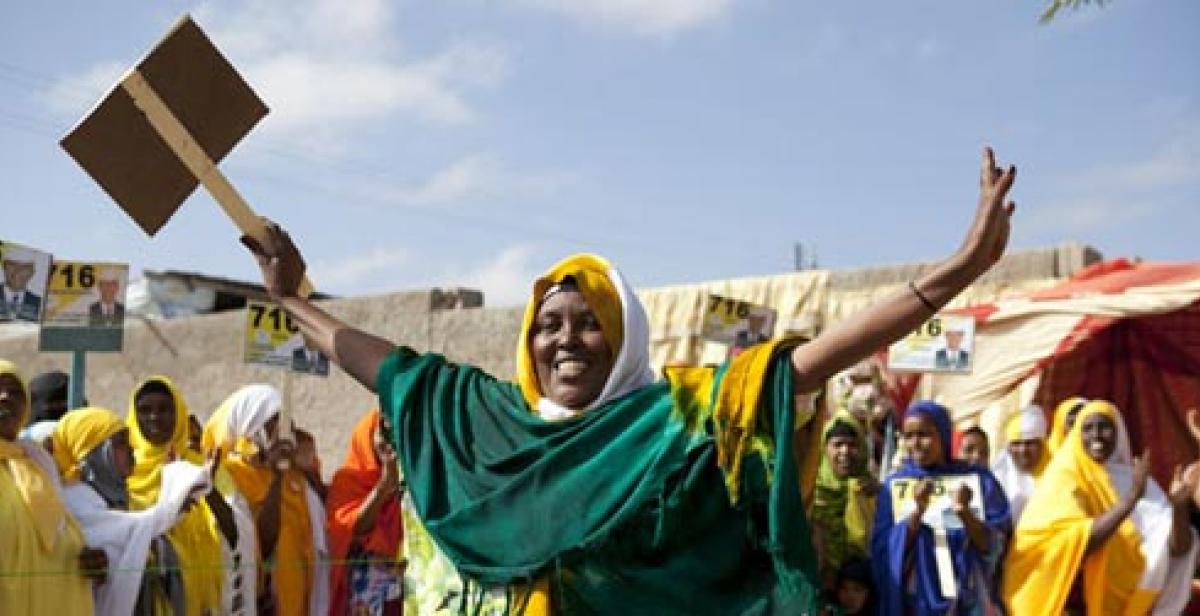 Steve Kibble updates us on the situation in Somaliland as the elections draw near:

Those eager to read how the current seven political associations and parties become three constitutional ones will have to curb their enthusiasm for the moment.

First, the Burao issue highlighted in my last blog seems to have got sorted by the provision of 89,000 extra ballot papers and the introduction of a two-stream system inside polling stations in western Burao – ie, doubling the number of ballot boxes in certain polling stations. We wait to see from forthcoming observations how this will work. With the way the sexes divide – meaning four queues (two each for men and women), plus seven party agents, six polling staff, domestic and international observers – it could get as crowded and hot as a broken-down London Underground train in the summer (for international readers – a form of underground London transport).

Meanwhile the set-piece of our trip was a small International Election Observers (IEO) delegation calling on the President and three ministers at the presidential palace. Once we had kitted out one of the team with a spare tie, we were able to put forward concerns – mostly those raised by political parties, such as arrests of their candidates and allegations that candidates were being paid to withdraw their candidacies.

We were also keen to track down the Presidential Decree calling on political parties not to have civil servants campaigning or to use state resources for political party/association purposes. We duly received a copy along with assurances it was being followed. The President, ministers and leaders of the governing Kulmiye party vigorously denied allegations of using state funds on this and other occasions. Some of this dispute revolves around the nature of a civil servant. Ministers and political appointees are generally allowed to campaign, whereas civil servants are not.

The most significant controversy has surrounded the head of the national AIDS commission (SOLNAC) campaigning for the governing party. Government members argued he was a political appointee, others see him as a non-political appointment.

On candidate arrests, according to the government one of these instances was an intra-clan battle over which candidate had clan support, which led one to use intemperate language (possibly anti-religious). They claim that other arrests have been due to violations of the Code of Conduct, including campaigning on unauthorised days.

The meeting was cordial and the President promised to address our concerns that the way the three political parties were voted for should be much more transparent and more widely understood.

Which segues neatly into Law 14, Article 6, rather a mundane title for something which could provoke a bit of bother. This is the mechanism that determines which of the seven political associations/parties has successfully won the right to become one of the three political parties, permitted according to the constitution, for the next 10 years.

• Seven are chosen and must contest all regions

• The winner, if there are several with 20% or more in each region, is the one with the highest percentage. That party is awarded a rank score of 1 in that region, with each party ranked/scored in order. This count is then repeated through the next five regions. The party/association with the lowest aggregate score is deemed to be the top qualifying party, and those with the next two lowest scores take the second and third spots available.

There could be trouble ahead

Problems, of course, could arise if parties get unequal support across regions but build up large numbers of votes in total. In that case, it is conceivable they may complain at missing the cut in spite of receiving large numbers of votes. It is also quite likely that at least the third-placed party (maybe all?) will struggle to get 20% in all regions.

The Supreme Court is on standby to rule on such issues (or at least it has been advised to be so by an outside negotiator). While the electoral provisions are reasonably clear, it is quite likely that they are not widely understood by the public – a situation not helped by the division of labour between the NEC (National Electoral Commission) and the Registration and Approval Committee which announces the three party winners.

According to our vox pop in the streets, circumspectly talking to voters, there is a high degree of awareness of the election – difficult to avoid as public campaigning has restarted with its usual exuberance, especially from young women (readers with long memories will remember my earlier blog on this). There also appears a high degree of party/association recognition. We were struck by a youngish lad volunteering the information ‘I’m going to vote for the woman candidate’ – perhaps the attempts to create a women/youth coalition are paying off?

The parties sport different colours which bear some relationship to clan allegiance. Some stand out more than the others that rely on the more religious colour of green. Waddani looks like an Orangeman’s sash, Xaqsoor (pronounced like a useful item in your toolbox) is yellow and white like the Papal flag. RAYS, pronounced ‘rice’, looks like the Spanish flag and by comparison Umadda has a sideways-on Indonesian one. In the interests of impartiality we also mention here Kulmiye, the governing party, DALSAN and New Ucid – the latter sporting an emblem of a sheep being weighed, as used in licensed premises named ‘The Fleece’ (though not widely seen in Hargeisa).

Most of the core team is now here and we have begun briefings for the wider team on electoral process (with a walk through a mock polling station guided by a couple of Aussie election experts), code of conduct for observers, radio training, security, media awareness, political context and the like. Accreditation and then deployment out to the regions comes soon.

OK five days to go. Hang on to your (election observer) hats...

Hi Steve I am Somalilander

I am Somalilander living in Hargaisa. I can say that your info on how election is going is as accurate as it can be.

I have not decided yet which party to vote, but I am glad the campaigns are ending today (fed up with the trafic jams, noises caused by party supporters).

The thing that avarage people on the street (including me) worry about most is what would happen the day after the announcment of the results. Some think, parties/candiadtes that failed in 20% might incite tribal violance and test the peace here. I know many candidates that invested in this, by selling houses, cars and prime land properties. These might not go home quietly if they loose.

Lets hope for the best.

This local election has some

This local election has some flaw and contradiction from the start point. The expectation and wishful thinking of the somaliland people has been hijacked by the desire and narrow thinking of few, whom their prime goal is to hold the political power of this country for the coming decade, and use the local election as ladder to achieve that goal, regardless the respect of the law and democratic values of transparent and fair elections, this one has been diverted from the norm course of democratic value and based on tribal line. It will have its negative backlashes in due course.
Regard,
Nasir Ghalib/ syd gabane