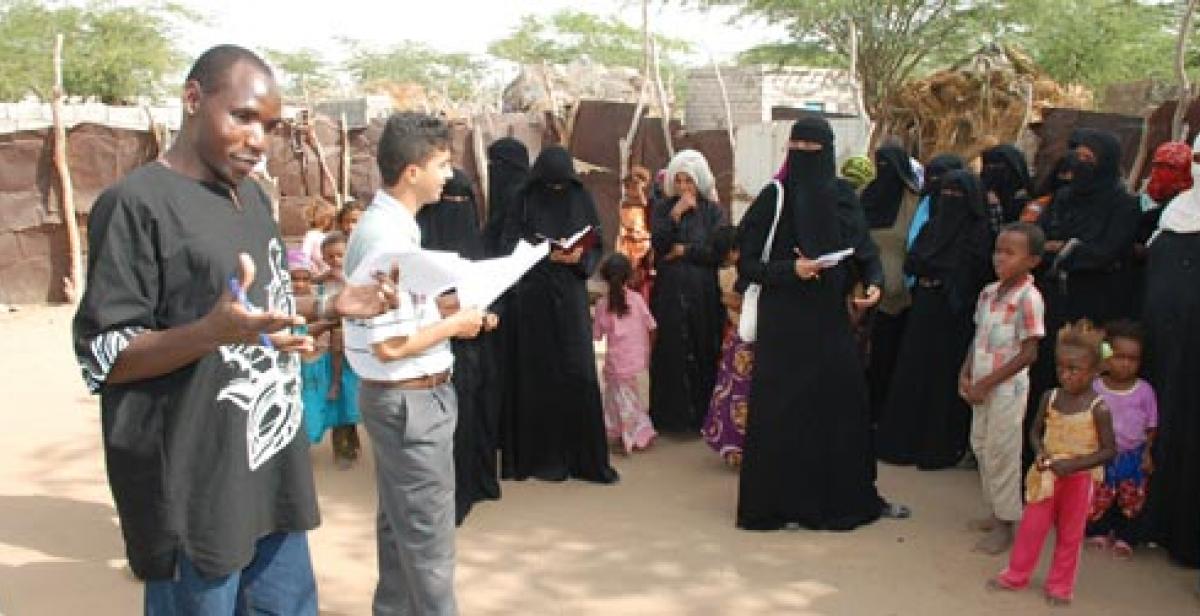 A lack of power and disregard for their rights puts women in Yemen at particular risk from HIV – but the obstacles are slowly being overcome, writes Progressio development worker Joseph Aloo

Do women in Yemen have a voice?

Women’s rights are seen as important in Yemen – but only by the women themselves! Several women’s organisations and associations are trying to empower women, but this effort is more on economic than political empowerment. Most of these organisations provide literacy and life skills to women. Such programmes, however, don’t fully liberate women, since they don’t result in any policy change that would ensure more women’s representation in decision-making.

The participation of women in politics and activism can at best be described as minimal. Women are still very marginalised and far from decision-making in the country. Although there is one woman in the country’s executive who is in charge of the Ministry of Human Rights, her efforts are dwarfed by the majority of the male-dominated government and parliament who make decisions that mostly favour men.

What do the men think?

While men will value the rights of a woman to the extent that it serves him – for example, ensuring that girls get education so that they fetch more bride price – it cannot be said that absolute rights are honestly valued when it comes to women.

Although young men who are educated to college level think that women’s rights are important, they are still too bound by their cultural and religious beliefs to admit this outright, never mind speak out about it. There is also fear of being branded a rebel for championing any cause that is seen to contradict social norms.

Certain Islamic scholars have been trying to campaign for equality for women, but their arguments tend to be dismissed as foreign, academic and anti-Islam. Therefore, they may not have much influence over the thinking and beliefs of the people.

What does this mean for HIV work?

Women in Yemen face huge cultural barriers in terms of access to information. This is perpetuated by the cultural belief that women should not talk in the presence of men. In addition, women are not allowed to interact with men in public, due to the mistaken belief that doing so will open floodgates of immorality. The place of the woman is therefore in the background/kitchen/home. This problem is so serious that a woman has to be accompanied by a male relative whenever she has to travel out of the home environment. Even well-educated women with university degrees have to bow to this cultural dominance by men.

There are additional cultural challenges. For example, although there is a strict religious regime in Yemen, poverty – and the high rate of divorce, which often leaves women destitute – has pushed many young girls and women into prostitution. Since these commercial sex workers are women who are marginalised, they have to do their trade underground, a factor that exposes them to risks of sexual violence, exploitation and HIV infection.

What are the cultural factors?

Early marriages are common in Yemen. Girls as young as 14 are married off to men old enough to be their grandfathers. Even the national Parliament has failed to pass a bill on outlawing early marriages despite Yemen having ratified the UN Charter on the Rights of the Child. Such girls are very disadvantaged in such marital relationships and this is also another cause of the high divorce rate in Yemen.

Female Genital Mutilation is a common practice among some tribes in Yemen. This practice exposes girls to great risks of HIV infection as well as other health complications associated with the reproductive system.

But the ultimate challenges are denial and taboo. In Yemen, sex is still a taboo subject. People cannot talk about sexuality and this hampers the awareness on HIV and AIDS. It is a taboo to talk about sex or reproductive systems. Even in the school curriculum, this subject is completely omitted. People are living in denial while prostitution is going on and the HIV virus is spreading, but the culture does not allow people to talk about these things.

So how do you reach women with messages about HIV?

Another way is through the media. Through print and electronic media, appropriate messages are sent out to specific groups such as women and young people.

A key approach, however, is through religious leaders. These  people have a lot of influence on the lives of the people in Yemen. Therefore for any intervention to be effective in achieving behavioural change, this cadre of society must actively be involved. So far, after training of the Imams, they have played a major role in creating awareness on HIV through their sermons in the mosques. There has even been a forum of Imams on HIV, where trained Imams regularly meet to deliberate matters concerning HIV and AIDS.

As a result of sustained intervention, one of Progressio’s partner organisations, Abu Musa Al Ashary, has been able to set up a support group of people living with HIV. This group has some very good examples of people who have overcome stigma and are now living positively with the virus.

Photo at top: Joseph Aloo (left) and Saeed Mohammed Seif during a community needs assessment conducted in the district of Al Marawa in Hodeidah. During the assessment, the community identified and prioritised their needs. Water came top as the priority need of the community. Consequently, Progressio partner organisation Abu Musa Al Ashary mobilised resources and partnered with the community to develop a community water project.

Below: Assessing community needs: women and children participate in the discussion. 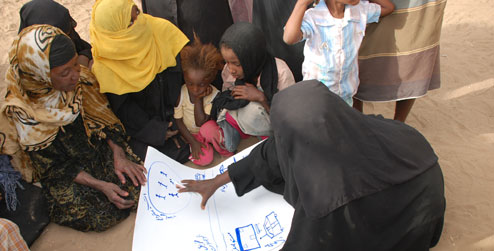 Below: A woman travelling on a donkey to collect water. 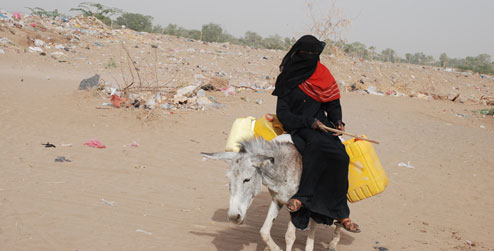 Joseph Aloo is a Progressio development worker in Yemen, working to build the capacity of local organisations in Hodeidah. The main partner organisation is Abu Musa Al Ashary. The project is funded by Irish Aid. Joseph is from Kenya.

It is wonderful to hear of

It is wonderful to hear of how the local community in Yemen is determining the help that is offered, and also the emphasis on changing gender relations through so many well-thought-out routes. And it's very refreshing to read such an unashamed account of challenging gender imbalance, written by a man.

In the UK, where women have political equality, but where some are rather more equal than others in the economic and domestic spheres, it is rare to hear an admission from a man on how women still draw the short straw in their wage packet and at home. In comparison to Yemen, perhaps UK women are so close to full equality the male consensus in our post-feminism times is to ignore it and hope it'll go away...