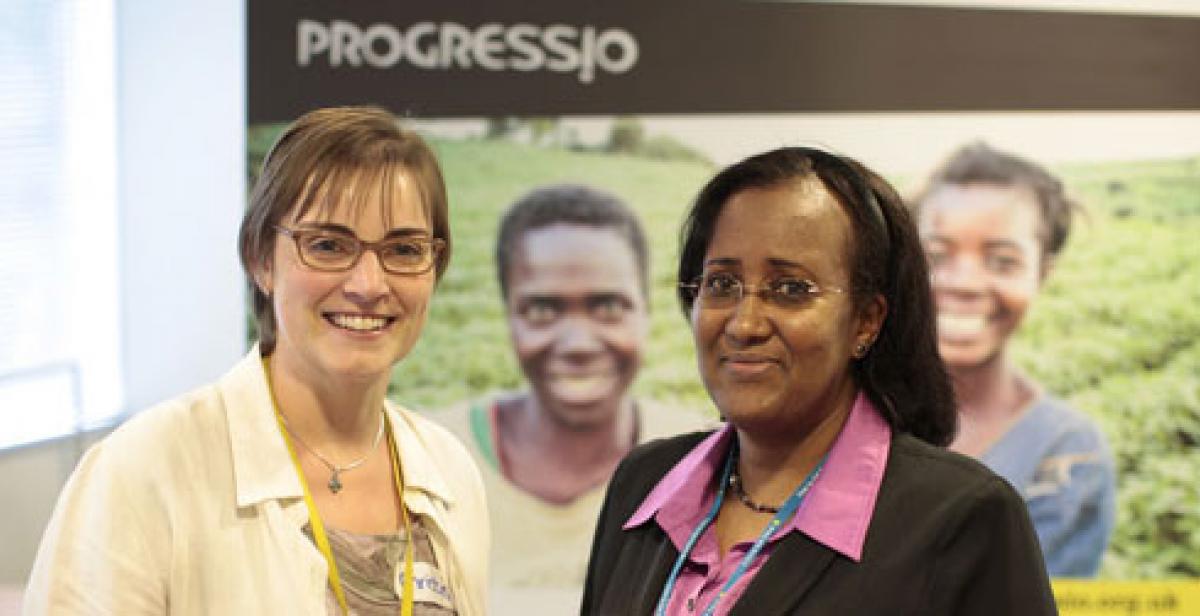 “I was once passing through Entebbe airport in Uganda,” recounts Suad Abdi, “and the official looked at my passport and said ‘My word! You are from Somaliland, a country much smaller and poorer than ours and yet you’ve got through 3 presidents in less than 20 years while we have been stuck with the same one for so many many years! How do you make sure they move on when their time is up?’”

It seems everyone is keen to find out what is special about Somaliland. Needless to say, it was a relief and a pleasure to welcome Suad Abdi, Progressio’s new Country Representative for Somaliland, here in the UK to host a workshop exploring Somaliland’s much envied secret recipe for stability.

Getting here was quite a feat – not because Hargeisa is that long a flight away, but more because for a Somalilander there’s unsurprisingly a lot of paperwork to get through to visit the UK, who along with the rest of the international community do not recognise Suad’s home country as a country in its own right.

But it seems it was a journey worth making. “Meeting Suad and having a chance to talk over tea and cakes has deepened our understanding of her country – we don’t usually hear much about Somaliland in the news, particularly not good news,” says one supporter at Progressio’s supporter event on Saturday 17 September.

So what makes Somaliland special?

There have been valuable lessons to take away from an afternoon with Suad. Not least, as one participant observed "it’s given us some space to revisit the way we use terms like ‘fragile states’ and ‘failed states’ that are so freely bandied about in the media."

“And so what did you say to the guy at Entebbe airport?” asked another workshop participant. Suad’s answer is a challenge. “I told him ‘That is something you too will have to learn for yourselves.’”

And it seems she’s reluctant to share the secret recipe of Somaliland’s success for the simple reason that what works for Somaliland might not work for another context. She suggests that it is the result of a unique approach: the combination of old and new. Age old traditional methods of resolving disputes through clan structures are wedded to a firm commitment to parliamentary democracy.

The pros of being invisible on the world map

In addition, it seems that the lack of recognition by the international community may have had a silver lining. Being left alone, without high profile intervention from the UN or other world powers has meant that Somaliland had the space to find a system that worked for them.

“We never had to do what someone else told us to do,” says Suad. “What we have in Somaliland is home-grown traditional clan-led democratisation.”

Progressio has been providing skilled specialists to support local civil society organisations in the process of democratisation in Somaliland for many years and in 2010 mobilised an international election observation team that declared Somaliland’s election free and fair.

“We managed to hold free and fair elections despite not being an internationally recognised country!” says Suad proudly. And while its borders may not be recognised on the world map it seems Somalilands achievements are being noted in the corridors of power.

MPs from both sides of the Commons highlighted the positive situation of Somaliland in a debate on Food Security and Famine Prevention on Thursday 15 September. Tony Baldry MP said “For 20 years, Somaliland has had repeated democratic elections, a functioning presidency, a functioning Parliament and defined borders”, while Kerry McCarthy MP said “there is huge potential to build the infrastructure… making the country a lot more profitable and cementing its stability.”

Sounds like Somalilanders have it sorted... or do they?

But it’s not all rose tinted postcards from Hargeisa and Suad is the first to acknowledge some of the challenges facing Somaliland. “Somaliland is dependent on outside exports for food security and prices continue to rise. Unemployment is very high. Rural people are having to sell livestock to afford food and the value of livestock [which depends of market values in the Middle East] has dropped so many cannot afford food.”

Furthermore, while not currently as severe as the situation in Central and Southern Somalia, the threat that drought in the region might worsen and lead to famine is ever looming.

“To be able to solve these problems, it’s essential that women are involved in policy making. After all women are the main breadwinners, they manage household expenses, collect water and make sure their children’s health and education needs are provided for. They know more about public services,” says Suad.

How can women and youth help?

As a founder member of the National Women’s Network NAGAAD, she’s been part of the struggle for women’s participation in politics for over 14 years. “Although women make up the majority of voters, getting elected in Somaliland is particularly hard for women because people still vote according to clan loyalties. And for a women, your clan changes depending on who you marry – so the clan you were born into might not vote for you because you have married into another clan and vice versa. Not only that, but women do not have access to finances for campaigning,” Suad explains. “Now, 14 years since setting up NAGAAD, 3 out of 330 local councillors, 2 out of 82 parliamentarians and 1 out of 82 in the House of Elders, are women. You may think that’s not very many, but that is an achievement and it’s a start. Transformation is a process and any process takes time.”

There are challenges for young people too – life expectancy is around 47 and yet you have to be 35 before you can stand for local election. “I’m really looking forward to working closely with the Somaliland Youth Network, SONYO,” says Suad. “What we are doing in partnership with SONYO is working with young people, for young people, teaching them ways to develop themselves so that they can take charge of their own lives and futures.”

By the end of the afternoon’s workshop it’s clear that Suad has passion and believes that Somaliland will continue to astound its neighbours in the future. It may be that Suad comes from a region Western media and politicians have deemed ‘fragile’ but it’s clear that neither Suad nor the communities she represents are ‘fragile’ people.

Read more about the Have Your Say supporter day

Catch up on the Investing in Progressio supporter workshop