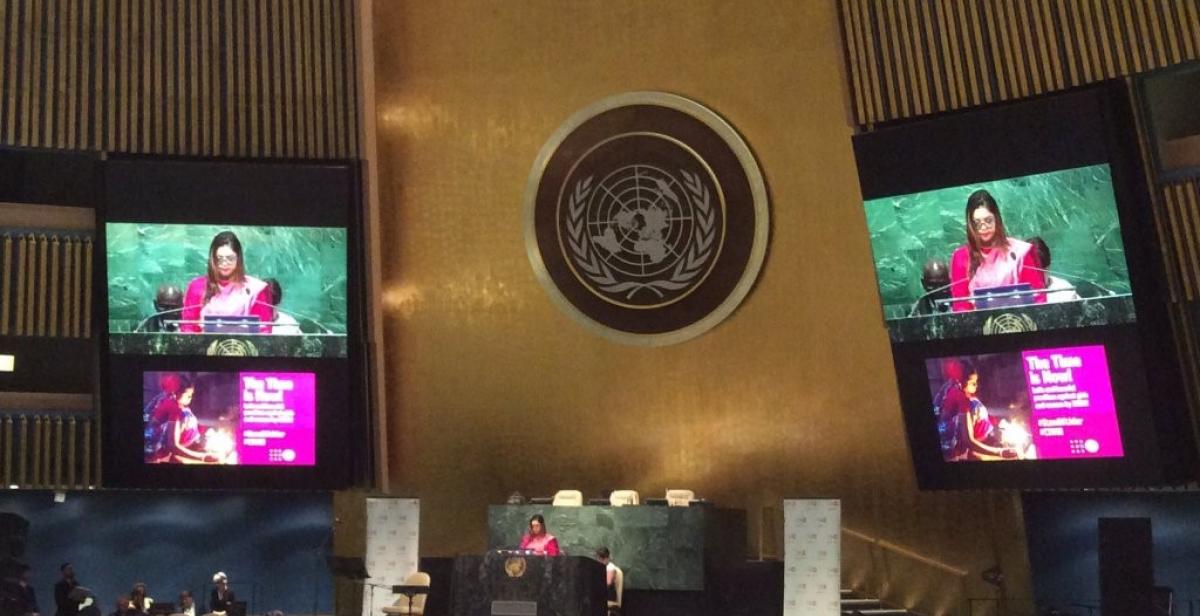 "I have been a victim but today I stand here to fight", UNFPA gives the UN stage to female survivor

Fatima Haase, Progressio’s Policy and Advocacy Officer, is in New York attending the 60th Session of the Commission on the Status of Women (CSW). In this blog, she shares her thoughts on the CSW conference, as well as describing the inspirational moment when survivors of harmful practices, such as female genital mutilation/cutting (FGM/C), were brought to the stage at the UN’s General Assembly Hall.

The CSW is an event that always evokes strong emotions.

Prior to the conference, there is an anxiety about how the zero draft of the agreed conclusions looks like, as well as hope that the proposals we put forward to the government, to improve the language of the text, is going to be taken up in the negotiations.

For me, the emotional roller coaster was on-going throughout the whole week. I was excited to hear that apparently Uganda has domesticated the global Convention on Ending Discrimination Against Women (CEDAW). But, I was disappointed that an event on social innovation and technology was primarily focused on repeating the same old problem: 'Women are not in science and technology jobs, we need to get them into these disciplines'. It lacked concrete proposals on innovative approaches on how to achieve this.

And then I was inspired. One day I attended two amazing panel discussions. One was on the necessity of girls being at the table to implement the Sustainable Development Goals (SDGs). It was truly inspiring because it was fully moderated and discussed by young girls and women.

I sat there and listened to young women aged 16-25 who have been active in their community since a young age. Suddenly, I felt an urgent need to get out of the room and get engaged in changing the world immediately. Because, whilst it is extremely important to hold our governments to account, it’s even more so important to find solutions at the local level ourselves, and present them to people in positions of power so they can help us to scale those up, if they are successful.

These young girls had encountered the power within. Some shared their experiences of how they had been told they couldn’t do something, just because they are a girl. Yet they discovered their power by persevering regardless, and found that by setting themselves goals and working towards achieving them, things can change.

Pictured below: Progressio's Jenny Vaughan (left) and Fatima Haase (right) with Baroness Verma (centre), the Parliamentary Under Secretary of State for International Development and Ministerial Champion for tackling Violence Against Women & Girls Overseas, at CSW 60. 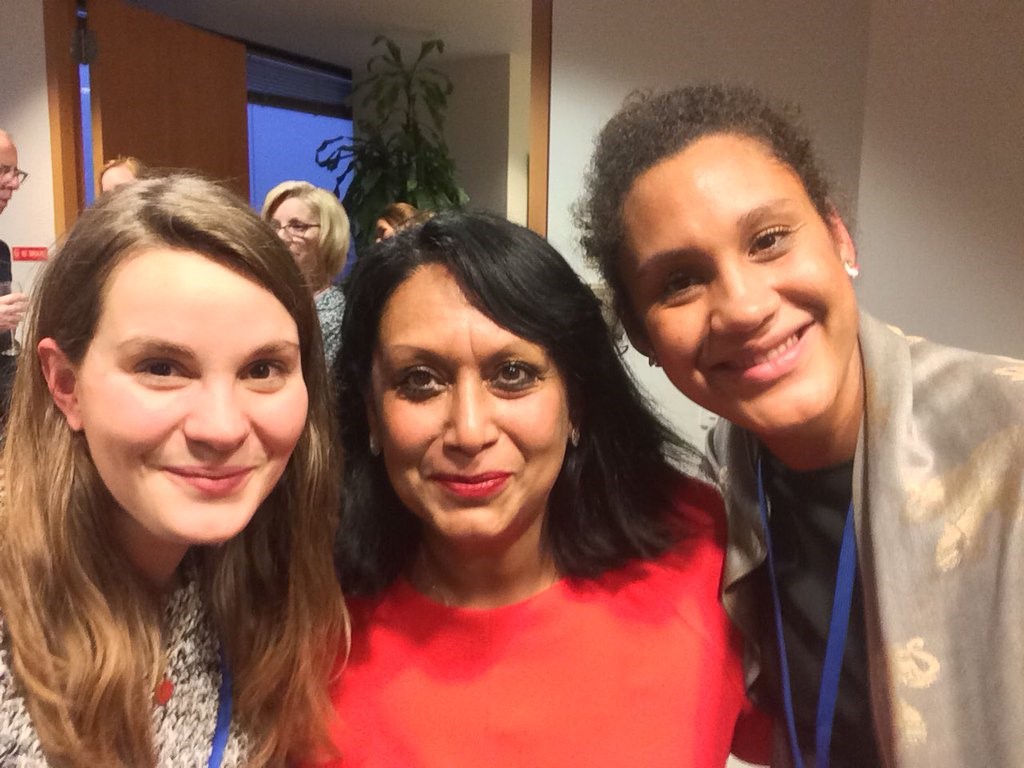 After this, I attended an event by the United Nations Population Fund (UNFPA), which brought thriving survivors of harmful practices, such as female genital mutilation/cutting (FGM/C), acid attacks and wife beating to the stage. They were not only victims, but survivors who are also thriving in life, despite their scars.

"It felt so right to see these strong women at something as important as the United Nations General Assembly Hall, a place where member states normally discuss human rights issues. By having these women and girls at the world’s most important stage, we give them high visibility." 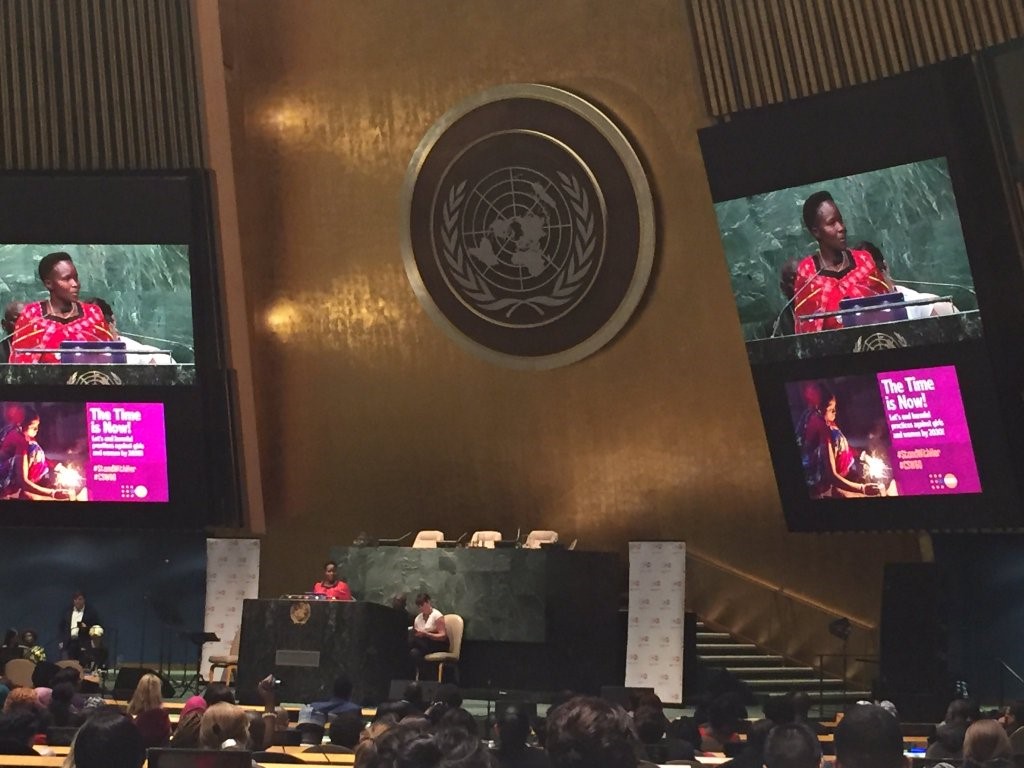 This is especially important as I learned today, in another event, that making girls and women invisible is part of suppression techniques, which is an important analytical tool through which patriarchy can be analysed.

Besides the importance of bringing these girls and young women to the centre of attention, I was grateful for UNFPA for the musical entertainment they made available for us. They invited opera singers to perform the song Amazing Grace in the assembly hall. Just by bringing this beautiful song to the audience, I felt that all of us suddenly felt stronger again to go out there and spread the word.

After 12 hour days, the beauty of music helped some of us to remember the moments in which we have been inspired, made progress, or felt enlightened.

As a new dear friend I made during the past days of mine said to me:

“If you want to get rid of the dark, light a candle.”