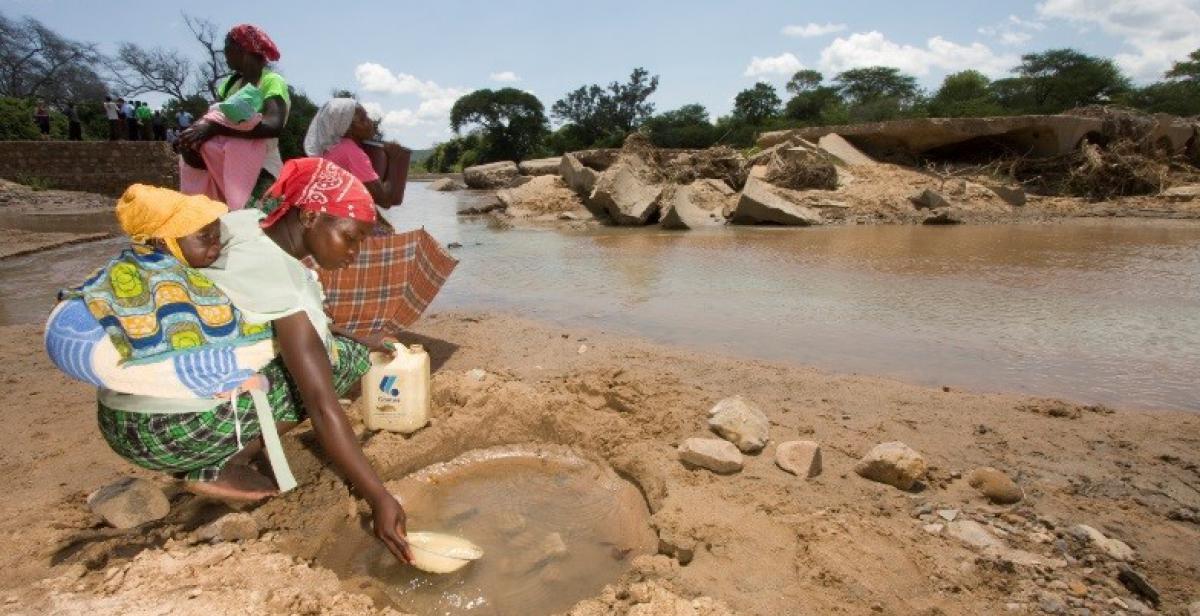 Pictured: Women collecting water in Zimbabwe, where a woman's role is often to become a wife and look after household chores.

Fiona Mwashita, Progressio’s Southern Africa Regional Manager, explains how socialisation, a continuing process whereby an individual acquires a personal identity and learns the norms, values, behaviour, and social skills appropriate to his or her social position, worsens the level of violence against women and girls in Zimbabwe.

There are two main reasons for the perpetuation of gender-based violence (GBV) in Zimbabwe. Firstly, there are social norms that lead women and girls to believe they have a lower status to men, as they are taught to be submissive to their husbands, and men and boys are taught to be masculine, in an overly assertive way. This means that with the current status quo, men make most of the decisions in relation to a woman’s life, even those that affect her sexuality and economic wellbeing.

Some discriminatory social norms even allow for GBV to happen, for example, in some communities women are taught that if a man is abusing a woman there is something wrong with her. Without challenging discriminatory and harmful social norms the cycle of violence against women and girls cannot be broken.

Secondly, the lack of information and access to education on the issues of GBV and women's and girls' rights also perpetuates GBV. Gender training and awareness is mostly targeted at women in rural areas, however many of these women are not economically independent and therefore do not have the means to exercise their rights.

On the other hand, NGOs struggle to reach women who are economically secure as they spend their days at work and cannot therefore attend the gender training in the community. This means that women who have the power and financial means to bring about tangible change often do not possess the knowledge of how to make it happen. Although these women hold powerful positions in their jobs, they still suffer from gender-based violence. This is because the minute they get home from work they leave everything they have learnt about gender equality by the gate, and become subservient to their husbands. In communities throughout Zimbabwe there is a lack of female role models to help eliminate GBV.

Educating men also needs to be brought to the forefront in the fight against GBV. To deconstruct discriminatory cultural practices and social norms, men need to be aware of women's rights, and they also need to advocate for women's rights.

More civil society organisations need to reach out to men as well as women at a community level, in order to bring about lasting change. We need men and women who champion gender equality to lead by example.

One of our projects, implemented by our local partner organisation ZACRO (Zimbabwean Association for Crime Prevention Rehabilitation of the Offender), has challenged stigma and discrimination against people with HIV, which is a more latent type of GBV. For example, women who are released from prison often struggle to be accepted and reintegrated in society.

Recently, a woman who had been released from prison was rejected by her family and community because she was an ex-prisoner and HIV-positive. However, with the help of Progressio and ZACRO she was rehabilitated back into society.

With support from the programme she has learnt how to develop economic independence, and has shared her knowledge about this process to benefit her family and community. This means she has also gained back their acceptance and respect. Not only did this project help her to rebuild her life, but it decreased the stigmatisation surrounding ex-prisoners and people living with HIV in that community.

Our projects also use support groups, consisting of local people, which give talks to the communities about HIV to raise awareness of the issue and de-stigmatise it. Members of the community who are HIV-positive would not normally feel comfortable talking about their situation, and so they use these support groups as a platform to discuss their situation and the challenges they face. These groups also help educate people about HIV and how to deal with the gender-based violence that often comes hand in hand with HIV.

In the process of eliminating violence against women and girls, we need to make information about women's and girls' rights as accessible as possible. We also need to encourage women who understand their rights to teach other women and girls, which would also demonstrate that women can and do have a voice in their communities. And, lastly, the discriminatory social norms that hold the current patriarchal society in place need to be challenged and changed.

Zimbabwe currently holds laws in place which tackle GBV, however there is no appetite to implement these laws at a community level. The government have a major role to play in the eradication of GBV; the legal framework is in place and should be enforced by the government. Therefore, responsibility lies with them to ensure anti-GBV laws are effective and implemented across the country- with support from all members of civil society.

You can also share this video to help us raise as much awareness as possible, thank you!