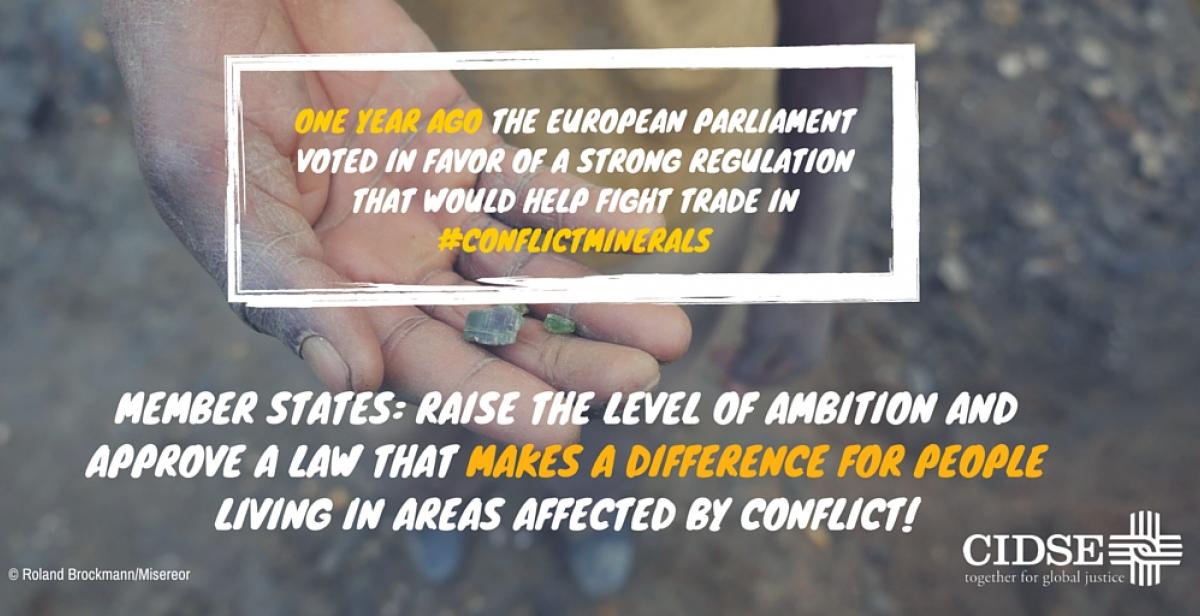 Exactly one year after the encouraging vote of the European Parliament on conflict minerals, CIDSE, the international family of Catholic social justice organisations, including Progressio, publishes a video interview of Abbot Léonard SANTEDI, the Secretary General of the Congolese Bishops Conference.

In the video, Abbot Santedi explains why a voluntary regulation would not be enough to improve the situation of populations living near mine areas: “A mandatory regulation could lead to the end of abuses, but at the same time it would lead companies to be more responsible. Companies would no longer be complicit in trading minerals extracted on the other side of the world, in conditions creating suffering and the non respect of human dignity.” A regulation along the entire supply chain “would be a step also towards better awareness of citizens who would not accept to be complicit in the death and bloodshed of fellow humans in this trade” said Father Santedi.

The video was shot during a public debate co-organized by CIDSE in Brussels on 14th of March, with the panel also including the President of the Foreign Affairs Committee of the European Parliament, the company Umicore, and EurAc, the civil society platform for EU and Central Africa.

Abbot Santedi takes a critical view of the very slow progress of the discussions between the various EU institutions involved. The urgency to improve the situation on the ground should push EU negotiators to act quickly and strongly in order to put an end to serious human rights abuses. As an example, Abbot Santedi shared that the 2010 US Dodd Frank Act has spurred real changes by business actors of all nationalities towards responsible mineral sourcing.

I come here with a cry of suffering from my people, but also a cry of hope. In keeping with its values and respect for human dignity, the European Union has a duty of responsibility, and solidarity. Otherwise it’s the law of the jungle.

Consumers want to know that the products that they are buying have not caused conflict, violence or devastation. We need a mandatory regulation to ensure that all businesses are held to the same standard and have a legal requirement to check their entire supply chains. This is the only way to weed out trade practices which are putting people’s lives at risk everyday, simply because they live close to mines and in mining areas. Progressio wants to see an end to the link between resource extraction and conflict for good; this EU legislation gives us the opportunity to take a step forward towards this, as citizens we have the power to influence the success of these negotiations.

You can take action by signing Progressio’s petition to trialogue negotiators below.

Since the recording of Abbot Santedi’s statement, CIDSE welcomes that the trialogue negotiators (the negotiations between the European Parliament, the European Commission and the 28 EU Member States that form the EU Council) agreed on a mandatory aspect for a part of the regulation. But the outcomes of the negotiations are still falling well short of the demands expressed by many civil society organizations, as well as those of nearly 150 Bishops from around the world. CIDSE strongly regrets that the downstream companies (the companies manufacturing the products after the minerals are refined), and especially the SMEs (Small and Medium Enterprises) are still invited to opt-in on a voluntary basis.

Stefan Reinhold, CIDSE's conflict minerals campaign coordinator affirmed that “EU Member States must be coherent and target all companies along the entire supply chain. The EU can’t claim to be leading on Human Rights protection while watering down such an important regulation”. Recently some German metal companies joined this call, by publicly reclaiming that downstream companies also be included[1] in the EU regulation, as to not create imbalance and unfair trade conditions.

Background on the conflict minerals regulation:

In the absence of a strong regulatory system, European citizens cannot be sure that the products they buy and use daily didn’t involve human rights violations. To tackle this issue, the European Commission proposed the "conflict minerals" regulation in March 2014. The proposal was disappointing in many ways: it consisted in a self-certification system that companies could voluntarily join, and it only applied to 19 smelters and refiners based in the EU (while not covering all products entering the EU market that contain the targeted minerals). On 20 May 2015, the European Parliament (EP) strengthened the proposal by requiring all European companies manufacturing or importing components and final products containing the targeted minerals to check their supply chains to make sure they don’t fuel conflicts or participate in human rights violations. But Member States have been looking to weaken the plans. High-level negotiations have gone behind closed doors in a trialogue process where the regulation is being watered down and rendered almost meaningless to those affected by this bloody trade.

CIDSE is an international family of Catholic social justice organizations, working together to promote justice, harness the power of global solidarity and create transformational change to end poverty and inequalities. We do this by challenging systemic injustice and inequity as well as destruction of nature. We believe in a world where every human being has the right to live in dignity.

Other CIDSE’s resources on conflict minerals are available.