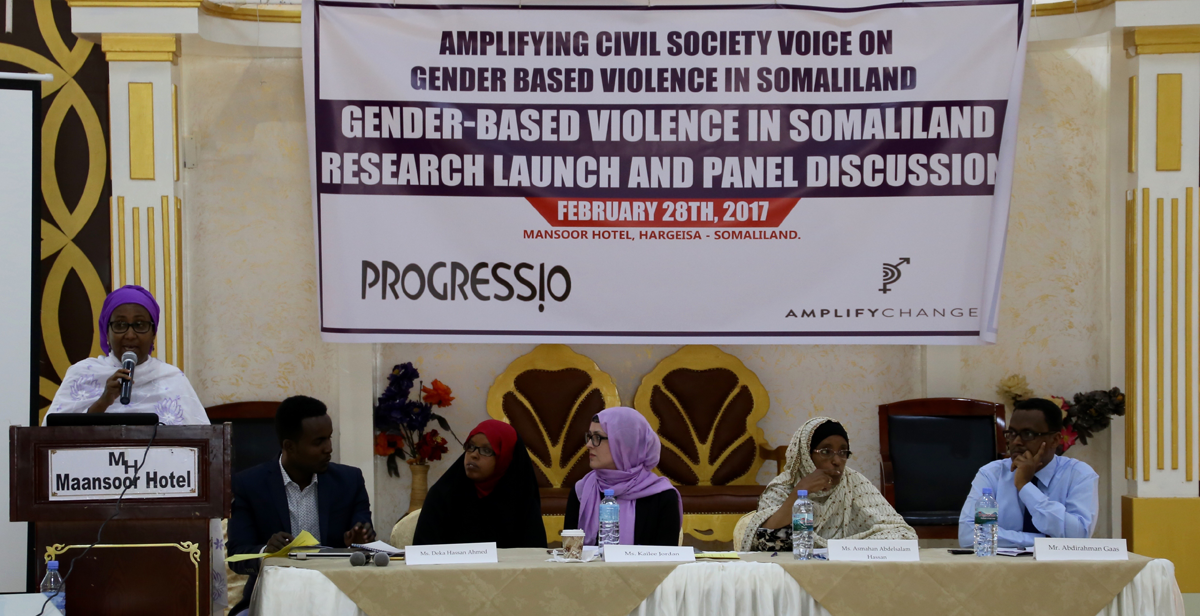 Kailee Jordan (middle of the group at the table), Progressio’s Somaliland Country Representative and civil society members at the public launch of the ‘Amplifying Civil Society Voice on Gender-Based Violence in Somaliland’ research project, in Hargeisa

Kailee Jordan, from Canada, is a Progressio development worker in Somaliland working as a Gender-Based Violence Research Adviser, with the Amplify Change Civil Society Coalition, made up of 12 local civil society organisations.

Before coming to Progressio, I’ve worked in various development and humanitarian organisations across sub-Saharan Africa, including UN Women, the Institute of Development Studies, and the Danish Refugee Council. My main area of focus has been primarily gender and conflict. I have also conducted several qualitative research studies in conflict and post conflict areas.

I’ve lived in East Africa for several years before coming to Somaliland, so I did not think it was going to be much of a culture shock - but it was! The climate, dress, food, culture, everything was very different. Before coming, I expected Somaliland to be very different than my previous work in neighbouring Somalia, but what I didn’t know is how much Somalilanders want to talk to you about how peaceful their country. Everywhere you go you will find people asking you how you like Somaliland, and making sure you know everything is safe and stable. Somalilanders have a lot of national pride.

During my time with Progressio, I’ve been working on a project called Amplify Civil Society Voices on Gender-Based Violence. Essentially, my role is to facilitate a participatory action research project on gender-based violence (GBV) in Somaliland, and then connect this evidence to national advocacy. I work with a coalition of 12 different local Somali civil society organisations, providing capacity building on GBV and research methodologies, as well as overseeing the study and general project activities.

It can be really difficult to connect research to policy and to practice. Throughout my work in sub-Saharan Africa, I’ve often found that people can think of researchers as disconnected from the reality on the ground, or as foreigners who perpetuate harmful power dynamics around knowledge production. What has been really wonderful about this project is that the research has been grounded in participatory action principles. It has been the civil society coalition driving the process the entire way. Getting to accompany the teams into the field and see them put their skills into action was a highlight of my time here.

Since we’ve published the study, the evidence has been used to hold national and community dialogues on GBV. Currently the coalition is trying to use the research to push for changes in Somaliland’s sexual offences legislation. Being able to actually see your work create debate and discussion around such a sensitive issue in Somaliland has been very motivating. 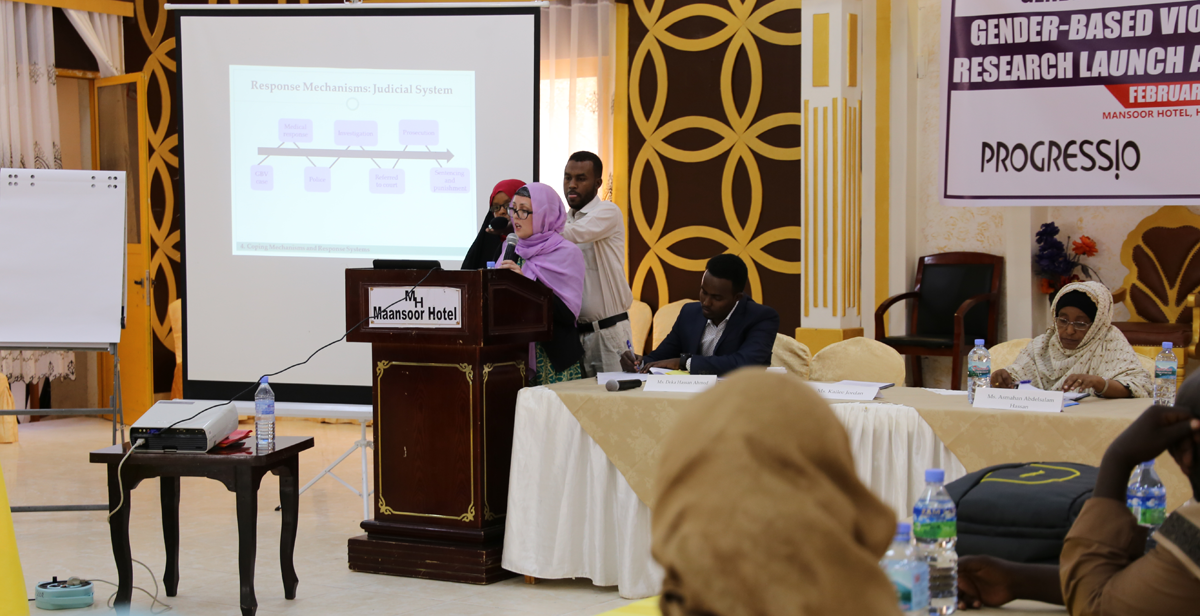 The best part of my job by far has been getting to work with some rock-star Somaliland women’s rights activists and civil society members. My colleagues in the partner organisations we work with are extremely inspiring - they’re the ones putting in the work at the grassroots level and trying to make their country a safer place for women and girls.

Gender-based violence is a sensitive topic in any context you work in, but addressing these issues in an Islamic, post-conflict society is extremely challenging. One of the biggest lessons from this project is the importance of listening to and working with community power structures, which in Somaliland means traditional and religious leaders. For example, the most common mechanism communities use to respond to cases of GBV is by using customary law, which is done through traditional leaders. Customary law does have some positive elements, such as being culturally relevant and a confidential process that communities trust, but also can be very damaging to victims, as they can be forced to marry their perpetrators or have to accept payment instead of going to the courts. This is a very sensitive issue in Somaliland, however it needs to be resolved for proper justice for GBV victims. We needed to work with and listen to the stories of traditional leaders to understand their role in this process, and we were even able to bring in traditional leaders from all research sites to participate in a national GBV dialogue. Because we involved traditional leaders in the process, communities were more open and willing to discuss these difficult topics with us.

The other lesson to come from the project is the need to focus on men and masculinities. The men we spoke to consistently brought up how they felt neglected by NGOs and that their concerns were not addressed. They spoke of how rising unemployment and addiction to khat (a leafy plant common in the region, which acts as a stimulant when chewed) has created a negative situation for men, with this frustration often taken out through violence against their wives. The lack of social spaces and places for positive masculinity, especially for young men, has also led to an increase in youth gangs, who are the main perpetrators behind a rise in gang rape. If these issues are to be addressed, men need to be involved, both in coming up with solutions and addressing male-specific issues such as substance abuse and changing masculinities.

Social norm change, especially on gender-violence, is a long and complex process, and often can’t be measured within the scope of a short-term project. However, over the course of the programme, we were able to take small steps toward change. For example, after publishing the research we were able to hold a national conference on GBV, bringing together a diverse range of stakeholders, including religious leaders, traditional leaders, government, CSOs, UN agencies, and community members. At the conference, one participant noted how even a couple of years ago, research on gender violence and a conference on GBV would have been too sensitive to hold, and that this was a major step forward for Somaliland. Being able to use evidence and evidence-based advocacy to open up even a small space to debate GBV is a really important step in breaking the silence on these issues.

What is the biggest development challenge facing Somaliland?

Unlike its southern neighbour Somalia, Somaliland is a relatively peaceful, stable, and democratic country. Despite this, it still faces massive development challenges, such as poverty, high unemployment, lack of access to basic services such as healthcare and education, and high child and maternal mortality. At the moment, Somaliland is going through an extremely bad drought, and challenges such as climate change and food insecurity are more relevant than ever.

Too often, development issues are seen as separate from gender concerns, with gender viewed as merely a ‘women’s’ issue that can be sidelined. Instead, gender equality is intimately connected to all of these development issues that Somaliland is currently facing. You cannot address poverty and unemployment unless you take into account women’s role in the economy and provide adequate economic opportunities for the entire population. You cannot address food security or climate change without taking into account women’s roles in livelihoods and food production.

The current drought is causing massive internal displacement, and as populations migrate or move into internally displaced people camps, gender-based violence rates go up. Besides the social costs of violence, GBV also has a massive toll on the economy. Recent studies in Africa and Asia have shown that gender violence can cost countries up to 1 - 2% of their GDP annually, through direct costs (such as out of pocket payments to health or justice providers) or indirect cost (such as wages and productivity lost when women cannot go to work).

As these examples demonstrate, the development challenges Somaliland faces are intimately connected to gender inequalities. If I have had to make one suggestion for helping Somaliland reach any of it’s national development goals, it would be that gender has to be a central component!

My work with Progressio has greatly expanded my skills and knowledge on GBV. Working on gender violence in an Islamic, post-conflict society has been a challenging experience, but has increased the strategies I have and my overall ability to work on such sensitive issues. I’m hoping to apply these skills to the next country I go to, wherever that may be!