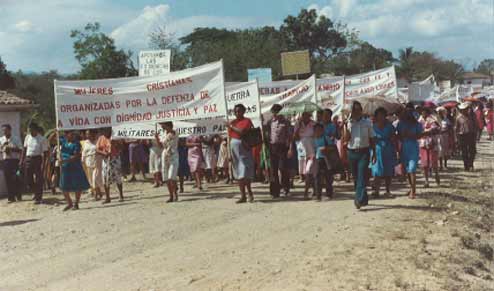 Progressio has undergone many changes in its 70 years, but we have always stayed true to our core values and our determination to speak out against injustice and help eradicate poverty.

Progressio, or The Sword of the Spirit as it was previously known, was formed on 1st August 1940 as a reaction to war and to Hitler’s rejection of ‘kinship and love’. Founded by a group of lay Catholics with the support of Cardinal Hinsley, The Sword of the Spirit was a “campaign of prayer, study and action [to] unite the citizens of this country in support [of] future peace”. (Cardinal Hinsley 1940)

In its early years The Sword of the Spirit worked to build peace in Europe. It published pamphlets on Nazism, and spoke out about the threat of totalitarianism to the Christian conception of life and to international order.

Although The Sword initially focused on oppression in eastern Europe, it began to widen its attention to the international stage and to address issues such as food aid and human rights.

This growing internationalism led The Sword to begin to recruit volunteers to work overseas in 1963, working in conjunction with the British Volunteer Programme. The Sword believed it was important to invest in people, and its volunteers set out to enable people in the developing world to find solutions to their own problems. This idea would later become central to the success of the organisation.

In 1965, The Sword of the Spirit was renamed the Catholic Institute for International Relations (CIIR).

While establishing a reputation as a leading international development agency, CIIR continued its policy work, seeking to provide a moral voice against human rights abuses and to influence both the Church and state.

By this time, CIIR was well respected for its analysis and commentary on international issues. It had developed good relationships with the global South and worked closely with grassroots initiatives in the developing world, giving a voice to the voiceless and projecting them onto an international stage.

In the 1970s, following the Second Vatican Council and its statement of commitment to “the option for the poor”, progressive elements in the Catholic Church increasingly supported grassroots liberation movements. There was a clear division within the Church between the progressive and the more conservative elements – and CIIR was very much on the side of the grassroots.

This, however, was only part of its work, as detailed policy analysis and innovative work on issues such as drugs, debt and trade were not expressly Church linked. CIIR worked in collaboration with others and published high quality analysis.

When the volunteer placements first began they were linked to the Church, but the overseas programme soon adopted a wider developmental perspective, working with people of all faiths and none.

Although best known overseas, the programme worked closely with other British sending agencies (through the British Volunteer Agencies Liaison Group) and secured a reputation for professionalism and integrity.

Crucially, it saw the needs of the people in the South as paramount, and so – rather than recruiting ‘volunteers’ – it began to recruit skilled professionals to do specific jobs in response to specific needs identified by our partners in the South.

CIIR recruited its first such ‘development worker’ to work in Nicaragua in 1974. It was also the first international development agency to begin recruiting local staff – rather than expatriates – to run its offices in the countries where it worked. It was a true partnership with the South, based on people sharing skills with local communities through grassroots initiatives, in order to help poor and marginalised people bring change to their own lives.

As time went on, our advocacy and development work became increasingly intertwined. Our campaigning and lobbying for policy change was rooted in, and therefore informed and strengthened by, the experience of our development work with partners overseas.

Meanwhile, this development work was based on the awareness that practical solutions to the problems of poverty must be backed up by changes in the structures and policies that keep people poor. Our development programme therefore explicitly sought to build the capacity of partners to undertake advocacy themselves.

This approach remains true today. By sharing skills at the grassroots, the organisation continues to empower people, giving them the skills and knowledge they need to bring about real and lasting change to their own lives.

As CIIR’s distinctive approach to international development took hold, it was becoming increasingly clear that the name, the Catholic Institute for International Relations, no longer represented the breadth and depth of the organisation’s work.

In looking for a new name, we wanted something that would reflect our proud Catholic roots, but also represent the values we hold and our determination to help bring change to the lives of poor and marginalised people.

In 2006, CIIR changed its name to Progressio.

The name comes from Populorum Progressio, one of the central documents in Catholic social teaching that emerged from the Second Vatican Council. Populorum Progressio speaks about the challenges of development and the importance of justice in relations between rich and poor nations. (Read more in This is Progress 1.6MB PDF, an abridged translation of Populorum Progressio.)

Progressio is also the Latin word meaning development and advancement, which speaks to all people with its message of hope and justice.

The decision to close has been taken with deep regret, on the basis that we have not been able to secure sufficient levels of income to ensure a viable future post March 2017. It is our intention to as far as possible complete all project and partner commitments through to the end of March 2017 alongside our Global South partners. For the International Citizen Service (ICS) programme our sub-contract will pass back to the ICS contract holder Voluntary Service Overseas. With regards to the other three projects where funding continues beyond the end of March 2017, we are currently working with a few organisations to ensure our current work and existing commitments can be fulfilled after March 2017.