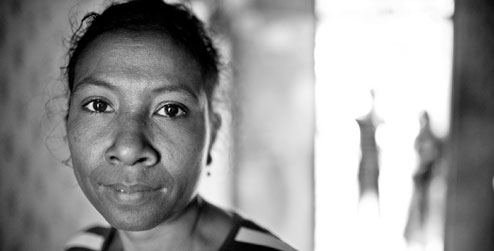 Floriana Nunes Saldanha lives in Timor-Leste’s capital, Dili. Her husband Luciano Sequeira was murdered in the violence that broke out after the vote for independence in 1999.

“Since Luciano was killed I have had to work very hard to support my children, to send them to school,” she says.

“I’ve picked coffee, worked as a nanny, washed people’s clothes, cleaned their houses and looked after their children. Now my main income is from selling firewood.

“I want to ensure that my children get an education for their future. I won’t be around forever.

“What do I hope for the future? Two things. I expect the government to help me to look after my kids.

“But I want justice too. I don’t know who killed my husband, so I’m expecting the government to do something for me to support me.”

Progressio has been doing something too. Our development workers Mark Hunter and Tamara Wiher have been supporting the Judicial System Monitoring Program (JSMP), a local NGO and human rights watchdog.

They’re also helping to strengthen the justice system by building the skills of JSMP’s own lawyers and working with them to provide human rights training for other Timorese lawyers.

Without justice, peace is fragile. For Elsa Araujo Pinto, the memories of the violence of 1999 are still fresh.

“I didn’t understand why people were burning houses, shooting; why the Indonesian army was destroying houses, killing people.

“And in 2006, I experienced some direct violence. There were riots on the streets. It wasn’t safe. We were attacked in my house.

“Now I am a refugee in my own country. My family house was destroyed.

“There is a wound. There is a scar. People are still jumpy.”