MDGs: so what happened? 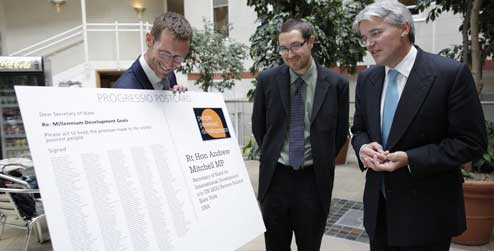 The Millennium Development Goals represent the most significant effort ever made to fight global poverty. They're off track so Progressio campaigners spoke out to urge the UK government to keep its promises.

So what happened next?

Well, we made giant postcards from your names and a picture of Betty Mkusa, a small-scale farmer in Malawi - to make a point about the importance of the environment in meeting the MDG tagets. The postcard was a nod to the fact that politicians dislike postcard campaign actions...

Then we embraced the cold and took an early morning photo outside Parliament for the press. This is what it looked like: 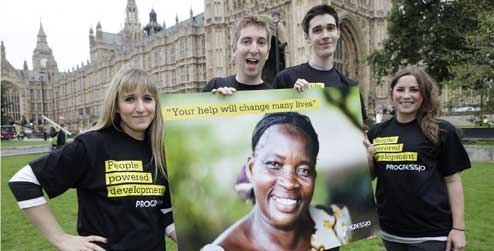 We were pleased. Then we got it into one of our favourite Catholic papers, The Universe. This is what it looked like (it looked lots better in the actual paper, though).

Since the Pope was in town, we thought we'd ask the Secretary of State for International Development if we could meet with him and pass on your names. Happily, he thought it'd be great (DfID and Progressio are a winning combination you see) and we handed them in person to Andrew Mitchell - the photo is on the top of this page. James Trewby is our supporter in the middle. Andrew Mitchell said it was "enormously encouraging to all of us who are going that we go with the support of Progressio – and all your supporters" and pledged to do his best.

But what really happened?

Innocent Ogaba, a Progressio ‘Local Hero’ in Malawi who knows how important the MDGs are, said “We need your support. It’s your time to act”. And did we?

Stephen O'Brien, Parliamentary Under of State for International Development wrote to us on behalf of the Deputy Prime Minister. He didn't really engage with the environmental focus we had, but wrote about the things the Government has pledged to do which include:

Mr O'Brien believes the Outcome Document sets out an ‘integrated framework for action’ which will be a focus for global efforts over the next five years.

Despite decent leadership from the UK, there were dissenting views about the Summit itself. You can read what NGO umbrella body Bond has rounded up about the summit, both UN and NGO statements here.

NGOs were fairly scathing about the Summit, quick to point to the shortcomings of the agreement, calling it variously "empty promises" (ActionAid), "strong on rhetoric, weak on commitment" (Article 19), and a "mirage" (Oxfam).

However you look at it, it seems that there's clearly more to do ahead of the 2015 deadline.

Thanks to all those Progressio supporters who took the time to participate. The MDGs will roll around again, and we'll be part of the chorus calling for action.

More information about the MDGs

Find out more about Progressio's work in Malawi on food, environment and the MDGs, including Andrew's story.

Read Heather Li's thoughts on the recent Papal Visit and the MDGs.

You can also read the joint statement prepared by UK overseas agencies (including Progressio) ahead of the New York summit and get more information on progresss to the MDGs.

And here's a letter from development agencies to the government ahead of the summit which Progressio signed too.