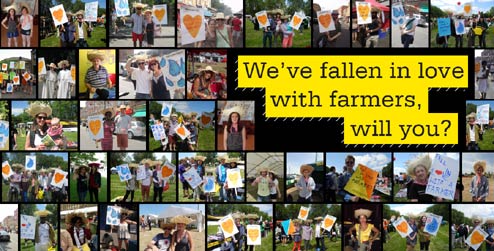 The Enough Food for Everyone IF campaign ran from January to September 2013, when a coalition of over 200 organisations set out to tackle the 4 ‘Big Ifs’ that together would make a huge difference to hungry communities around the world.

The world produces enough food for everyone, but not everyone has enough food. The food system is broken and we wanted to influence our leaders to take action on 4 key themes: aid, land, tax and transparency at the G8 Summit in June 2013.

The Progressio journey was impressive. Together we wrote, emailed, lobbied, put on and attended events, prayed and sung, and even dressed up! For more than 6 months, we worked tirelessly to push the issues of food and hunger up the political agenda. Most memorable was the Big IF event in Hyde Park where the sun shone and tens of thousands of likeminded campaigners came together to say no to hunger. Check out the whole journey from start to finish by clicking on the graphic below. 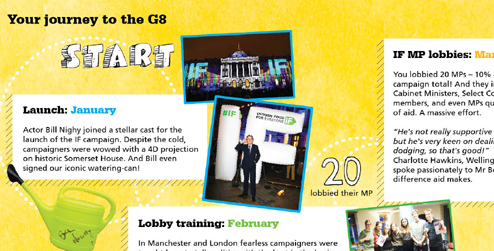 But what was the outcome from a Progressio stance?

In general terms, the G8 recognised the critical role played by smallholder farmers, especially women, and that improving management of natural resources in poor countries, particularly land and minerals, are key to tackling poverty.

But water was the forgotten resource at the conference even though it plays a critical role for small-scale farmers around the world. And the New Alliance, a partnership between the G8, developing nations and big business, wasn’t given the reform it needs. So muted applause for the G8 from Progressio.

In August we continued to push the UK Government by running an additional campaign action asking Secretary of State for International Development Justine Greening to fall in love with farmers. We wanted Justine to show her love by investing some of the extra 0.7% aid spend in small-scale agriculture, particularly projects targeting women and water for livelihoods. We collected over 4,000 signatures and we handed these in to Parliamentary Under-Secretary of State Lynne Featherstone in the first week of September.

We have made big strides this year and we should be proud of what we have achieved, but our work is not over; with your help Progressio and the communities we work with around the world will continue to work to overcome hunger.

The IF campaign coalition produced a leaflet which nicely lays out the the difference you made to the campaign - you can read it here.